The Indonesian company PT Darma Henwa ordered three machines alone, which were symbolically handed over by Sophie Albrecht to CEO Wachjudi Martono at the Liebherr exhibition stand at bauma during April.

“The Liebherr team in Indonesia is always very involved and provides us with excellent support. This support characterizes our relationship with the Liebherr Group very well,” said Wachjudi Martono, praising the relationship between the two companies. PT Darma Henwa’s fleet of machines already includes two R 9100s, two R 9350s and one R 984 C. The three R 9200 mining excavators will be used in coal mining applications.

“We are all delighted with this package order,” Lukowski said. “It confirms the trust of PT Darma Henwa in our products and services and affirms the development of a strong relation between our companies on a local and corporate level.”

In related news, Liebherr has decided to retire production of its 675-hp R 984 excavator. Launched on the market for the first time in 1986, the R 984 backhoe or face shovel, was equipped in its standard version with a 7-m³ bucket capacity. With more than 1,100 units sold worldwide, the R 984 mining excavator has earned a solid reputation as one of the most flexible digging and loading tool in the 120-ton class.

Used in the majority of cases for operations in open-pit mines and quarries, it is not uncommon to see the R 984 in unusual configurations. As an example, the R 984 C was employed at the El Cerrejón coal mine in Colombia because of its special long reach configuration. Several of these units have accumulated more than 60,000 hours.

The last unit was delivered at the end of 2015 to Algeria for dredging work. While customers can no longer purchase new R 984 excavators, Liebherr offers new machines, the successor models R 9100 and R 9150, both equipped with a Liebherr engine to continue satisfying its customers’ demands. 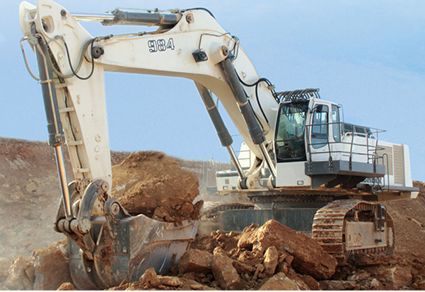 Liebherr announces the end of the R 984 era.