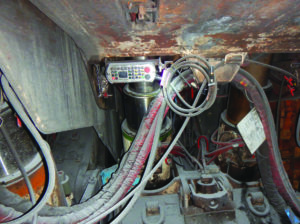 The PMC-R 2.0 roof-support controller, by Caterpillar, on a Cat roof support during a field trial where it beat expectations. The controller was designed to be a future-proof, key-enabling technology for longwall autonomy. (Photo: Caterpillar)

A mine that trialed prototype Caterpillar PMC-R 2.0 roof-support controllers reported a 25% increase in production, Caterpillar said.

Features such as “SIL2 being defined upfront” and “additional connectivity options for streamline integration, help to significantly improve the overall longwall performance and advance productivity, efficiency and safety,” he said.

Total availability reached 99.79%. “The high performance and reliability enabled the Tahmoor mine to achieve a number of new records with regards to longwall coal production,” he said. “The longwall system upgrade investments at the Tahmoor mine have resulted in increased productivity and laid a solid foundation for the extended life of mine.”

Calendared for release in Q4, the PMC-R 2.0 answers the high demand for solutions that help automate longwall production in Australia as tougher dust regulations come to bear. Miners there are seeking ways to remove workers from the face during production.

PMC-R 2.0 is the third generation of the successful PM line of controllers. It was designed to be a “future-proof, key-enabling technology for longwall autonomy,” Yates said. “The previous generations of Cat controllers had delivered industry preludes, such as teleremote control on the longwall face using the Cat PM4 and the first true surface remote control of a roof support using Cat PMC-R.”

The new controller is backward compatible with the predecessor controllers. This “provides a very cost-effective upgrade path for existing customers to enhance their longwall automation capability,” Yates said.

The successful field trial results are a “testament to the heritage of the controller, the extensive experience of the development team, and the quality of the components,” he said. The release will be an industry milestone for “the first next-generation roof-support controls system on the market.”