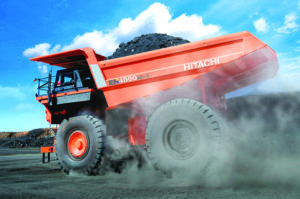 Hitachi launches Hitachi Construction Machinery Americas on March 1. The new division will be located in the Atlanta area. The company also announces plans to roll out a battery-powered haul truck in the near future.

Hitachi announced the launch of Hitachi Construction Machinery Americas Inc. (HCMA), which began sales and support of equipment in North and Latin America on March 1. The launch replaces the joint venture with John Deere. Speaking at the annual meeting for the Society of Mining, Metallurgy and Exploration, in Salt Lake City, at the end of February, HCMA Senior Director for Mining Equipment Babliton Cardoso said the group was excited about the new direction the organization is taking. “This represents a new era for Hitachi in mining,” Cardoso said. “The mining market is experiencing considerable growth and this is a good time to make this change.”

Since the August announcement, HCMA has added more than 60 new team members to support the transition and they are looking to hire 50 more people. “We are positioning ourselves to properly support our dealers,” Cardoso said. “From a mining perspective, there are seven dealers that have been retained in the United States and another eight have been retained for Latin America.”

HCMA will be headquartered in the Atlanta area. “In addition to supporting our mining-class haul trucks and excavators, we’re also building a 400,000-ft2 parts distribution facility,” Cardoso said. “We think this move will be good for our customers and ourselves, especially as we take control of our distribution network.”

The transition will be seamless, Cardoso explained. “Many of the dealers were already in place,” Cardoso said. “They are now working directly with Hitachi rather than John Deere.”

“Hitachi Construction Machinery and Deere worked together for many years to become a leading equipment provider in the Americas,” HCMA CEO Alan Quinn said. “As HCMA takes over control of equipment sales, service and support moving forward, we are preparing to launch new machines and new technologies while focusing on having a more direct relationship with our customers and dealers.”

The move comes as the company develops battery-powered haul trucks, hydraulic systems and machine monitoring solutions. “While our new operational structure is just getting started in North America and Latin America, we are excited to bring the full breadth of resources seen from Hitachi in many other parts of the world,” Quinn said.