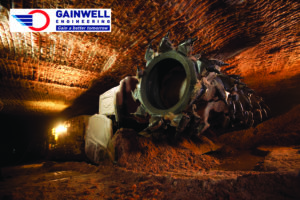 Gainwell establishes a presence in the U.S. to begin aftermarket sales and service for room-and-pillar and highwall mining equipment.

Gainwell Engineering, a company that designs, manufactures, and maintains mining equipment, opened their first U.S. location in Fayette County, West Virginia, on June 16, 2022. The company, which started in India, has several locations around the world.

“When Cat announced it was exiting the underground coal mining business, the equipment was split into different groups,” said Jason Sizemore, general manager, for Gainwell Engineering. “We retained the mid- to high-seam, room-and-pillar equipment, continuous miners, scoops, feederbreakers, etc., and the highwall miners (HWMs). Gainwell has been building the HWMs in
India since 2018 and they are getting ready to start production of the 5th machine, which will be the first of it kind entering into a mine in Australia.”

Gainwell Engineering is looking to increase its presence in the U.S. with new equipment and aftermarket sales and service, Sizemore explained. “We can rebuild components here in the U.S. and most of the parts originate from the U.S.,” Sizemore said. “A new piece of equipment would originate from India. We are currently in process of building a new state-of-the-art manufacturing facility. The first phase of the new facility is now underway and expected to be completed in 2023. In the interim, we will build the equipment at one of our other manufacturing facilities.”

Sizemore worked with the Fayette County Commissioners and the New River Gorge Regional Development Authority to bring Gainwell Engineering to the region and the company hopes to fill about 50 positions in the next year.

“We actually hope to exceed that number, and a lot of it is dependent upon what kind of response we get from the market,” Sizemore said. “Thus far, it’s been very good. We’re seeing a lot of interest from the various coal mining regions in the U.S., Canada and Mexico. We’re looking at some very large RFQs for parts, some new equipment, and rebuilding equipment, little bit of everything.”

In February, Gainwell entered into a commercial licensing agreement for underground mining equipment with Caterpillar, when it decided to exit the underground coal business. The agreement will enable Gainwell Engineering to manufacture room-and-pillar mining equipment. The agreement also allowed Gainwell to supply after-market spare parts and render service support to the existing active population of licensed Cat room-and-pillar equipment as well as highwall miners.