Taking the concept of bringing the machine to the material one step further, ALLU has developed a system for processing soft rock. The ALLU M-Series Screener Crusher attachment, for use on excavators from 50 tons to 160 tons or wheel loaders from 30 tons to 90 tons, is allowing some mining companies to combine three or four separate processing steps (crushing, screening, mixing and loading).

The large screener crusher attachment (sizes range from 5 cu yd to 11.1 cu yd) allows the operator to load RoM coal or blasted soft-rock material and crush it to desired size as it is being transferred to a truck, conveyor or stockpile. At the same time, the screener crusher attachment can screen out harder rock impurities or fines, which are then dumped into a waste or separate material pile.

Powered by the carrier hydraulics through an auxiliary circuit, the attachment requires no additional fuel source to operate, and generates no emissions of its own. Different processing drum configurations allow the attachment to be adapted from crushing to screening to a combination of both, producing fragment size configurations of 50, 75, 100 and 150 mm. The attachment can be utilized in open-pit, open-cast and underground mines.

By screening, crushing and loading in one step, the screener crusher attachment allows mining companies to reduce capital expenditures by reducing the amount of equipment needed on-site.

Fewer machines and at-the-face processing also mean that haul fleet and processing machine wear and personnel costs are reduced. And with production rates up to 650 tph, the one-step processing also is a time saver. 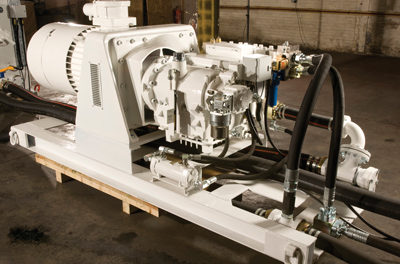