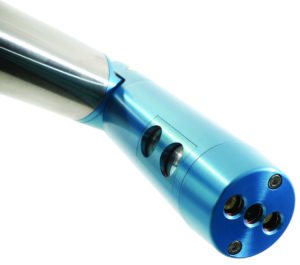 Carlson recently announced the C-ALS laser system, which provides safe, quick, and reliable mapping capabilities for inaccessible underground cavities. Deployable via boreholes on cable or rods, via a boom, or on a zip-wire, the C-ALS system can be used from the surface to provide a detailed visual record of the subsurface environment in a wide range of applications. A C-ALS Gyro option now gives greater navigational capability, ensuring that the probe’s position along the borehole can be determined without relying on the mechanical alignment of deployment rods or a magnetic compass.

Laser scanning has several advantages, including the ability to survey potentially dangerous underground voids safely; get precise and accurate cavity/void measurement in minutes, not days; and a 360° spherical coverage for a full view from a single scan, with no blind spots. The operation of this unit is remotely controlled and the deployment methods are flexible. The probe will withstand submersion to a depth of 1 m (in case accidentally deployed in a flooded cavity).

With a diameter of just 50 mm, the system is easily deployed through boreholes, downhole or uphole in order to survey inaccessible spaces. A system of hinged, lightweight, 1-m rods provide a fixed azimuth capability, as well as the ability to deploy the C-ALS down boreholes as long as 200 m. The probe incorporates pitch-and-roll sensors. The sensors ensure the unit can be tracked both up and down the borehole and that the scan is automatically georeferenced to fit into existing 3D mine data.

Alternatively, the C-ALS Gyro uses an internal MEMS IMU to establish the heading and inclination of the probe as it is deployed. An initial reference azimuth is determined on the surface and the survey is then relative to this heading. This gives the possibility of more flexible, cable-only deployments.

A nosecone camera, embedded within the end of the C-ALS probe, provides onscreen video and a real-time view of the borehole as the probe is deployed.

Once in the void, a simple click from the operator commands the laser-scanning head to rotate on two axes, measuring the 3D shape of the void with full (horizontal axis) 360° coverage and no blind spots, and with a range up to 150 m.