“Joy has offered a four-wheel independent suspension system as an optional feature on shuttle cars for ore than 10 years,” Peterson said. “What has taken this system up a notch is the new Joyride strut incorporated into the suspension system.”

According to Peterson, a standard Joy shuttle car without four-wheel suspension uses a pivoting axle supporting the machine’s discharge end wheels, and fixed axles on the loading end.

“The optional four-wheel suspension system, introduced a decade ago, is a passive strut system incorporating internal elastomeric pucks and spacer plates designed to last until the next machine rebuild, then to be discarded. The new Joyride strut system, with its patented technology significantly reduces forces on the suspension and offers the best-in-class ride today,” said Peterson.

“The Joyride strut is a product of one and a half years of design, component testing, and underground machine testing, including a full year of testing at Foundation Coal’s Emerald mine in Waynesburg, Pa.,” Peterson said.

“The timing for the project was right,” Peterson said. “Our customers had been asking if we could improve the current strut system to facilitate rebuilding, and Joy’s haulage engineering group was strategically driving the need to optimize the design characteristics to enable improved performance.

“The new Joyride struts can be retrofitted to suspension machines in the field today and a new chassis is not required to do so,” Peterson said.

While productivity and performance were the main focus of the new strut development, the goal was to have the best-in-class ride and to “separate Joy from the competition” by using technology that would provide real value to the customer.

“Joyride added value including superior dampening characteristics that reduce forces on the machine chassis resulting in increased operator comfort, reduced loss of material, and less rutting in roadways,” Peterson said. “This results in greater use of Optidrive speed capabilities as well and allows increased productivity and an improved bottom line, as has been proven in cars already operating underground.”

“A good analogy would be if you were driving on a bumpy road and the suspension system on your vehicle performed well,” Peterson said. “The impact of the bumpy road would be minimized and the speed of the vehicle could be increased. With shuttle cars, that means more trips per shift, which means more coal per day at a reduced cost to the operator.”

Joy first offered the Joyride suspension system on its 10SC32B model, recently extending it worldwide to most mid- and high-seam models. In total, Joy offers eight different shuttle car model variations ranging in capacity from 8 tons to the industry’s only 33-ton machine. The Joy 21SC shuttle car series is designed for low coal and the 10SC series for medium and high-seam.

“A key goal in the development of the new strut was to provide the best-in-class ride design,” Peterson said. “We hit our desired target. Additionally, our customer also has the capability to retrofit his existing suspension machine at rebuild and underground with the latest Joyride suspension strut technology without having to make chassis design changes.” 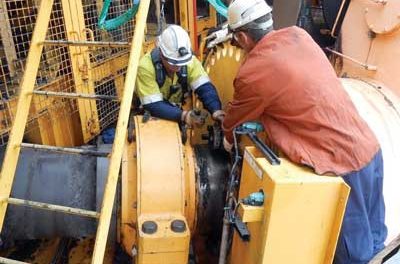