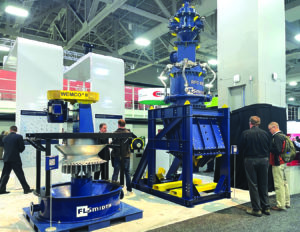 There are roughly 40,000 WEMCO ﬂotation machines installed around the world, according to FLSmidth, and the new WEMCO II, shown here, offers improvements in power consumption, air ﬂ ow and pumping.

The WEMCO II Flotation Cell builds upon the
WEMCO with optimizations to the rotor and stator/hood that the company said greatly improves power consumption, air flow and pumping. The company said the new WEMCO II’s combination of efﬁcient aeration and optimum solids suspension increases recovery, as well as reducing reagent consumption.

The WEMCO II design features full air control without blower and froth maintenance, which elevate kinetic performance and lower operational costs. The result is better hydrodynamics and circulation, improved kinetics and performance, optimized energy efﬁciency and lower operating costs, and the ability to control air without an external air supply, the company said.

Also getting an ofﬁcial launch at SME was the REFLUX Flotation Cell. The company displayed the smallest industrial-scale version of the RFC at the trade show, highlighting what it described as a ground-breaking technology that reduces plant footprint as well as water, air and energy requirements.

The RFC is described by the company as a high-efﬁciency ﬂotation cell. It reduces CAPEX by 35% and with no direct power input to the RFC, this results in 60% less energy use in a ﬂotation circuit. Results from pilot-scale studies indicate that RFC technology can help mines use up to 60% less energy in their ﬂotation circuits. Improved kinetic efﬁciency also reduces the amount of water used in the recovery process. 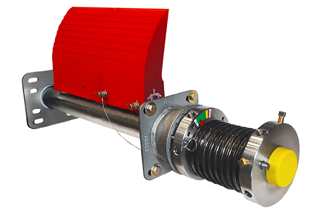