“We load ships around the clock, so it’s difficult to find time to make changes to our system,” said Marshall Elder, director of terminal operations. “We cannot keep vessels—and our customers—waiting for coal while we make changes to our equipment.” The entire transfer chute system was designed and constructed off-site by Martin Engineering, then installed in just four weeks of scheduled downtime.

Superior Midwest Energy Terminal handles approximately 22 million tons of western coal annually. The terminal unloads the unit trains bringing coal from mines in the Powder River Basin and transfers it onto vessels for transport to utility power plants in the U.S. and Canada. Located on a 200-acre site at the mouth of the St. Louis River, the 30 year-old facility has become one of the largest coal handling terminals in the world.

To receive its coal, the terminal unloads more than 1,400 trains from the Burlington Northern and Santa Fe and Union Pacific railway lines each year. “We unload railcars at 5,000 tons per hour, roughly 45 cars an hour, or a full 123-car train in about three hours,” Elder said. The terminal then loads that coal onto approximately 450 vessels during a 305-day shipping season. Ship loading operations run from late March until mid-January, when ice closes the Wisconsin port.

“This is the largest-capacity coal terminal having only one single-car railcar dumper,” said Fred Shusterich, president, Midwest Energy Resources Co. (MERC), a DTE Energy Co. that owns and operates the terminal. “We put more coal through that single-car dumper than any operation in the world. MERC is a high volume operation, and because of that fact, we make the investments to maintain peak performance levels of our primary coal-handling operations.”

Engineered specifically for the Superior terminal, the Martin Inertial Flow transfer chutes have minimized previous problems with plugging. “When a chute used to plug up, the material would spill onto the floor and around the conveyor idlers,” Elder said. “At 11,500 tons per hour, it doesn’t take long to put a large volume of material outside the chute. That’s a lot of spilled coal, and a lot of man-hours to clean it up. Minimizing the plugging problem has been a very positive aspect of these engineered chutes.”

Inside each chute, a “hood” controls the flow of coal from the discharging conveyor, maintaining a coherent material stream and minimizing induced air. At the bottom, a smooth-transfer loading chute or “spoon” directs the material stream onto the receiving belt at the proper speed and angle, minimizing the impact, material degradation, belt abrasion and expulsion of airborne dust. This reduces abrasive wear on the receiving belt and prevents the air currents that create and drive off airborne dust.

The terminal is anticipating another benefit from the chutes: longer belt life. “That’s one of the key reasons we went to the engineered chutes,” Elder said. “We anticipate an increase in belt life of approximately 40%, primarily because of the reduced abrasion realized with the new chute design. We anticipate getting seven or eight years of service out of our major belts, or between 175 and 200 million tons of throughput.” Elder said the company monitors the conveyor belt top cover, which ultimately determines when the belts will be replaced.

The performance of the Inertial Flow transfer chutes is helping Superior Midwest Energy Terminal maintain efficient operations and reliable supply. “We pride ourselves on the volume of material handled, and on our dependability,” Shusterich said. “We know it’s more than western coal we are delivering. We are providing power to communities, so we need to be consistently available and operating at peak efficiency. The engineered chutes from Martin Engineering help make that possible.” www.martin-eng.com 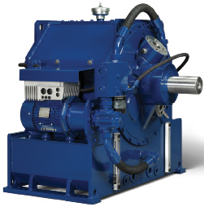