The world’s largest mining trade show, MINExpo INTERNATIONAL 2021, took place in Las Vegas during mid-September. As expected, attendance was light, especially for visitors from outside the U.S. The mood on the show floor was nonetheless upbeat and those who did attend got to see and hear about some interesting concepts. 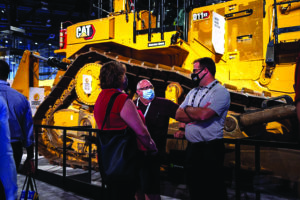 The Cat D11 XE, a powerful and efﬁcient electric drive dozer with high drive, serves as the backdrop.

Caterpillar unveiled its latest advancements in safety, sustainability and technology at MINExpo. The 55,000-ft2 exhibit featured a broad range of product displays, new equipment introductions, autonomous machines, remote operating stations and previews of what the future holds for the mining sector.

The exhibit was grouped under three areas: sustainability, technology and automation, and equipment lifecycle management solutions. The highlights included the Cat D11 XE, the largest, most powerful and efficient electric drive dozer with high drive. The new Cat D11 XE dozer was built to give owners a lower cost of material moved.

Komatsu has an ambitious vision for the future of surface operations; one that uses open technology to proactively manage on-site activities, connecting all steps of the mining processes by visualizing complex data. They see a world where interoperability will open the door to automation. Data will be shared across secure networks to empower real-time decision-making. Operations and maintenance will be conducted remotely. Optimized machine tasks, such as automated drilling and truck operations, enable the command of entire processes including the loading and haulage cycles. Ultimately, full enterprise optimization will be supported by connecting tasks, processes, systems and people across the entire value chain to promote continuous sustainable production.

Komatsu’s mantra for MINExpo 2021 was “Creating Value Together.” The equipment the company had on display spoke to many of the achievements it has made since the previous MINExpo in 2016. Working with mining companies and others, Komatsu recently formed a Greenhouse Gas (GHG) Alliance for an emissions-free haul truck. That haul truck, which will be powered by a trolley system and Li-ion batteries, was on display along with the new D475A-8 dozer, a ZR 122 rotary blasthole drill and a WE1850-3 wheel loader.

Jorge Mascena, senior vice president-mining technology solution for Komatsu and president and CEO of Modular Mining Systems, described how tomorrow’s miners will use data to transform the way they operate. “We are on the cusp of rapid change and innovation where automation and digitally connected and integrated technology intersect to optimize mine operations,” Mascena said. “We looked for a solution that cuts through the noise to provide a single source of information.”

Mascena was referring to Intellimine Synergy, an open technology platform that Modular Mining recently launched. Some of the solutions include advancements in optimization logic, integrated technology apps and a redesigned ecosystem architecture. “Data is not an end, but a means to create value together,” he said.

Mascena said payload management systems have already achieved a 5% increase in payload accuracy. It has also increased machine availability by 5% and extended the mean time between failure by 150%. “Using simulation tools and digital twins, we have now demonstrated a 23% improvement in cycle times for one mining operation,” he said.

Hori provided details on the plan for progressing from manned operations to autonomous mining by leveraging an open supervisory system. “Automation started with one truck at Codelco in 2008 and today we have 400 autonomous trucks operating in four countries and they have collectively moved more than 4 billion metric tons of material,” Hori said. “In 2022, we will launch an autonomous water truck.

What Hori said got him most excited was the development of tele-op systems for semiautonomous excavators. Twice daily, an operator using a set of controls in the Komatsu stand at MINExpo loaded autonomous trucks with a semiautonomous PC7000 at the company’s proving grounds in Tucson more than 400 miles away. “We’re trialing this machine at mine sites in 2022,” Hori said.

“The Power of One marks the next step in Hexagon’s convergence journey and the fulfillment of a commitment to connect all parts of a mine,” Hexagon Mining Division President Nick Hare said. “By harnessing data from multiple sensors in a simple and consolidated software architecture, we empower mines to become situationally aware, self-learning and autonomously connected in the field and in the cloud.

For the mines, the Power of One approach means reduced cost of ownership, reduced deployment and training time, reduced supply chain complexity and increased operator adoption. “This is a landmark enabler for next-generation autonomy, offering mines a uniquely intelligent approach based on open architecture,” Hare said.

“This is a milestone in a journey that began during the last MINExpo, soon after we announced the mining division,” Hare said. “Since then, we have assembled a team and established the brand, now we’re doing what the industry always expected, bringing all of this technology together on one platform.”

Hexagon Geosystems COO Josh Weiss knows the challenges firsthand. Before moving to Hexagon from the mining industry, he had to maintain 50 different applications including some DOS apps. These systems were complex with different technical details and architectural strategies, Weiss explained. He encountered a similar situation at Hexagon and in 2016, he led an effort to organize all the disparate technologies, breaking down silos to connect what’s planned in the office with what’s happening at the mine site.

“With this path toward automation, we are optimizing the process by connecting the mine plan to the fleet management system and connecting that to the truck,” Weiss said. “With the Power of One, there is the culmination of the technology and now the evolution of it.”

For the mines, however, the return on investment needs to be quantifiable. “Each application has its own tangible approach,” Weiss said. “With autonomy, we know the industry had some technology hurdles to address, so we developed a building block approach with various semiautonomous capabilities to address immediate needs, such as reverse assist, which automates the truck spotting process to prevent metal-to-metal contact. This has now become a cycle time optimization tool. With the building-block approach, we are also calculating the optimal path for autonomy if the customer decides to eventually move in that direction.”

As a technology provider, Hexagon’s biggest advantage is its safety ecosystem — collision avoidance, fatigue monitoring and personnel alerts. “Our safety portfolio is by far the market leader,” Hare said. “We have 45,000 to 50,000 vehicles equipped with collision avoidance and 10,000 miners protected by operator alertness systems.

“We came to the realization a few years ago that convergence, as in bringing it altogether, was the best approach for the future,” Hare said. “Convergence combines everything in one common platform, which saves money and time, especially when you consider that a haul truck has eight GPS antennae, four computer boxes and an operator display. If six different vendors were supplying those systems, the truck would experience a great deal of downtime with system installation, trouble shooting and maintenance.” 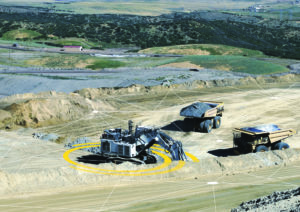 Liebherr presented the latest editions and upgrades for its mining product range at MINExpo, including equipment from its hydraulic excavator, haul truck, dozer, components and mobile crane product lines.

A wide range of options are available for the T 274, and the machine on the show floor was equipped with the Liebherr Trolley Assist System and the newly announced Liebherr next generation, interoperable machine automation. It was also equipped with a new Liebherr D9816 engine, which marked the beginning of the engine series integration into Liebherr mining equipment.

Specifically designed for the mining industry, the D98 series engine completes the already existing Liebherr engine portfolio for mining equipment and expands it to the upper power range. The series will be offered as an alternative option to the already existing engines.

The company also displayed its PR 776 dozer, a 70-mt-class mining dozer featuring a hydrostatic travel drive. With an average fuel burn 38 liters per hour, it offers best-in-class efficiency, according to Liebherr. To withstand the ambient temperatures in different regions, the PR 776 dozer can be equipped with an arctic package. Operators appreciate the convenience of a single joystick. Safety is enhanced via 360° blade and ripper visibility, provided by large panoramic windows and integrated ROPS/FOPS in the cab structure.

The PR 776 dozer can be operated by teleremote using the Liebherr Remote Control (LiReCon) teleoperation system. The system consists of a teleoperation stand, a state-of-the-art operator workspace with all required controls, and onboard dozer installations: cameras for all different angles and views, microphones for recording machine sounds, radio link receiver and transmitter. The high-resolution main screen provides a complete view of the worksite and around the dozer. The optional active person recognition system identifies people and obstacles in the work area further enhancing safety. 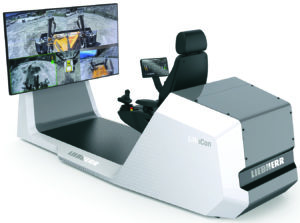 The LiReCon system offers increased safety, comfort and productivity for the operation of Liebherr’s mining dozers.

Liebherr also debuted its Mining Technology Product portfolio at MINExpo, which the company said defines its interoperable and scalable approach to their equipment, technology and service product offerings. The portfolio includes machine automation, digital services and assistance systems and onboard analytics product lines.

For automation of Liebherr trucks, excavators and dozers, the company is developing the next generation of autonomous solutions with the utmost safety and operational efficiency, supported by an open and interoperable mine autonomy platform.

Liebherr’s interoperable autonomy products for mixed fleet applications have the capability to interface with multiple traffic and fleet management systems. The company said it has developed and proven the world’s first open software interface between its autonomy kit and independent suppliers of its traffic management systems. 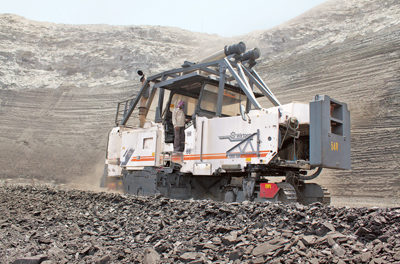 One of India’s Largest Mines Relies on Surface Miners