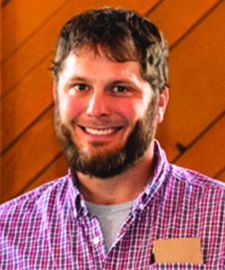 Peabody’s Derek Launius was named “Reclamationist of the Year” by the American Society of Mining and Reclamation (ASMR) for his outstanding accomplishments in the evaluation and application of technology used in land restoration. Launius, a senior environmental engineer at Peabody’s Arclar Complex in Illinois, is responsible for land stewardship at Arclar and closed operations in Illinois. Launius coordinated final reclamation and inspections at several of Peabody’s former mining sites, including Big Ridge and Eagle Valley mines. He was instrumental in achieving bond release for the properties and returning the land to productive farm use, forest and wildlife habitat. He is also responsible for leading ongoing reclamation at the Wildcat Hills-Cottage Grove mine near Equality, Illinois, where the vast majority of land is reclaimed to prime farmland standards. Launius began his career with Peabody in 2007, working in operations before joining the reclamation team. Incorporating his expertise in agriculture and land management, Launius has devised successful reclamation plans beginning with extensive soil sampling, along with innovative practices to ensure successful crop yields. His expertise in soil segregation practices and crop selection and rotation have greatly improved reclamation success on Peabody’s mined lands. In many instances, crop yields on the reclaimed land not only meet, but surpass established productivity standards. In addition to generating productive farmlands, the lands under Launius’s oversight provide habitat for countless geese, deer and other wildlife. Launius’s reclamation best practices have been shared across Peabody’s operations and with local farmers and professionals with interest in farming reclaimed mine lands.