And he was surveying in his spare time with a startup engineering company he formed with a Virginia Tech classmate. Quillen was named president of Paramont Coal Co. by the age of 31. His duties increased when he became president of WR Grace’s Eastern Coal Group, managing three different coal companies. In 1994, the mining engineer became president of six of Pittston Coal Co.’s mines, managing divisions in Virginia, West Virginia, Kentucky and Ohio. A year later, Quillen was promoted to executive vice president of sales and marketing, and president of Pittston Coal Sales for Pittston Coal, where he gained experience in international business, especially in the Far East. In 2002, he along with others formed Alpha Natural Resources. In the spring of 2012, he formally retired as chairman of Alpha. Quillen continues to be involved with his alma mater. He currently serves as the rector of the University’s Board of Visitors, and is a past member of the College and CEE Advisory Boards. He was the 2006 Distinguished Alumnus of the College. Most recently, Quillen was named 2011 Virginia Business Person of the Year. 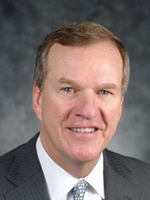 Society for Mining, Metallurgy and Exploration