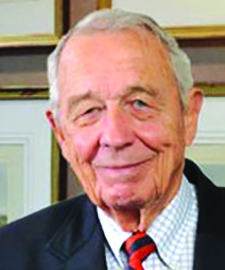 Evan Morgan Massey, 94, passed away March 10, 2021, after a brief illness. A pillar of the Richmond, Virginia, business and philanthropic community, Massey oversaw the transition of the A.T. Massey Coal Co. from a midsized family-owned coal mining and brokerage company into the third-largest coal company in the United States. He was active until his final days, going into the office daily to oversee his latest start-
up, Minerals Refining Co. After training as an aviator during World War II and graduating from the University of Virginia with an engineering degree, he started working full time for the family firm in 1949. With the support of his father and uncle, Evan Massey and William E. Massey, he expanded the company from its foundation as a coal brokerage through a series of coal properties in West Virginia and eastern Kentucky into a company that generated most of its revenue and profits from mining. In 1973, the family sold the company to St. Joe Minerals and he continued running the company until his retirement in 1991. After retiring from A.T. Massey, he started Evan Energy Co. to improve coal mining safety and methods in South America and China.

United Mine Workers of America (UMWA)