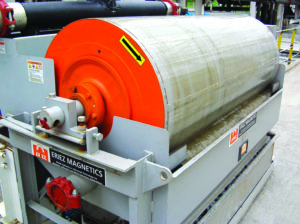 The only thing worse than losing magnetite is losing clean coal. Both are unnecessary expenses that can be prevented with regular inspection and maintenance. Drain-and-rinse screens play a pivotal role in magnetite recovery in heavy-media prep plants. They use a set of water sprays to wash the coarse coal as it passes across the screening media. A wet-drum magnetic separator is then used to recover the magnetite from the slurry that flows from the drain-and-rinse screens.

While magnetite losses are often blamed on the magnetic separator, they could be occurring in another area. Magnetite could be lost in multiple stages of the coal beneficiation process. The drain-and-rinse screens, for example, are trying to wash as much magnetite off the clean coal as possible. If they do not have enough water, however, the magnetite could be lost to the clean coal stream. Ideally, most prep plant operators make sure the sprays on drain-and-rinse screens operate correctly with lots of water to ensure all the magnetite finds its way to the slurry so the wet drums can do their jobs.

Wet-drum, magnetic separators haven’t changed much since the self-leveling tanks were introduced more than 10 years ago. They were matched with 950-gauss, interpole magnetic elements. “We have made some minor improvements to the separators, but in general, the wet drum that we had 10 years ago is pretty much the same device that is currently in use,” said Jose Marin, director-minerals and materials processing for Eriez. “We are always looking at future improvements as we discover new magnetic elements. If we feel stronger magnetic elements will be beneficial to the coal preparation process, we will consider adopting them.”

By matching the proper magnetic element to a particular tank, Eriez allowed prep plant operators to replace aging double wet-drum magnetic separators, which were typically concurrent to counter-rotation wet drums. “Many of those double drums were replaced by a single, wet-drum system and they provided the same performance or better.”

As a result, most modern prep plants today operate single-stage magnetic separators. “These units perform well as long as they are sized properly, meaning that they are designed for a certain hydraulic throughput, magnetic loading and percent solids,” Marin said. “There are other variables that could influence design, but many times, when the coal company is building the plant, they do not know those variables yet.”

The engineers at Eriez size the separators using a set of guidelines that have been established over the years. “As long as the wet drums are operating under those conditions, the recovery of magnetite will average 99.98%,” Marin said. “Typically we will see less than 1 gram per gallon of magnetite in the effluent.” A lot of coal fines in the slurry usually signals another problem upstream and modern prep plants have the means to control that.

Steady Improvements Over the Years

The combination of the self-leveling tank and the 950-gauss interpole magnetic element gave prep plant designers the ability to eliminate one stage of separation. That was a major leap. Once the equipment is installed today, it operates reliably until a bearing replacement or wear wrap repair is scheduled. “More recently, we incorporated an easy adjustment for the operating gap and the discharge gap on the drum,” Marin said. “We have also added a window on the tank so the technicians can open it and easily locate the last pole of the magnetic element and measure the discharge gap for the magnetite. That should help the maintenance crews reset the wet drum to its location prior to maintenance.”

Wet drums have three drive configurations: the conventional chain-and-sprocket arrangement, a belt drive, and a direct drive. “The direct drive is the most desirable in terms of reliability,” Marin said. “There is no need to perform maintenance on the chain or the belt. It’s a nice system, but it’s also a little more expensive.”

As far as maintenance, the bearings that support the wet drums on a magnetic separator were designed to last five years. “It depends on
the diameter and the type of duty, but if they are well-lubricated, they should last three to five years,” Marin said. “They can and typically do last longer. It really just depends on maintenance schedules.”

Each wet drum that Eriez manufactures is shipped with guarding on three sides. This is a safety feature that prevents technicians from coming in contact with moving parts. It has always been available, Marin said, but is now a standard feature.

Eriez has developed a new magnetic element for the iron ore industry, which is considerably stronger than the ceramic elements used in coal preparation. Looking toward the future, Marin explained that he would like to test one of these units in coal someday with a hybrid magnetic element, one that combines rare-earth magnetic elements and a ceramic element. “Rare earth magnets can be used to develop really strong magnetic fields,” Marin said. “It can attract magnetite with a lot of force. So, unless a transition is used to drop much of the magnetic field, the magnetite would not discharge from the drums.”

“We are considering the development of a magnetic element with rare earth elements that transitions to a zone that combines rare earths and ceramics (the hybrid) before reaching a short section of ceramic magnetic elements only, which we believe will allow the magnetite to properly discharge,” Marin said. “One of the requirements would be the use of rubber liners instead of the metallic wear wrap. The rubber liner has a rougher surface and it provides more traction to get the magnetite to the discharge point. The metallic wraps at almost all coal prep plants and iron processing facilities are polished to the point where they are reflecting like mirrors. That means that magnetite is building up on the poles and it stays there polishing and wearing out the wraps. A rougher surface with a greater coefficient of friction would move the magnetite easily to the discharge area.”

The costs for the rare earth units would be significantly higher than what is being used today and Eriez will have to evaluate whether a typical prep plant can afford this technology. 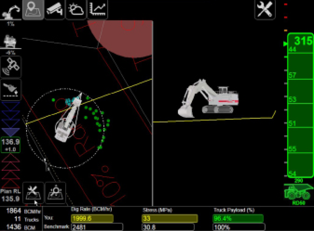