The JB1 Extrication Slide mounted on a machine at Bear Run.

The height of most surface equipment leaves a big stumbling block when an operator needs help during a medical emergency. An Illinois Basin miner has brought years of design ideas and work in his garage workshop to fruition with a new device that will help change the future of surface mine rescue.

In the event of an accident, the traditional Stokes Basket is often used to bring the individual to the ground for treatment, but the purpose of the board is defeated in most cases because a typical rescue is anything but stable. With the JB1 Extrication Slide, the creation of miner, mine rescuer and surface mine emergency team member Jason Bradbury of the Bear Run complex in Indiana, that same rescue can be made steadier, safer and often quicker.

Made of a tubular frame, the JB1 tool is used in addition to the basket and has been designed to fit, without additional tools or retrofitting, on to the industry’s most popular haul trucks, shovels, excavators and other equipment such as Caterpillar 793s, 789s and 785s, Hitachi 1900s, 3500s and 5500s, and the Caterpillar 5230.

“The JB1 system allows for a safe, fast manner of lowering a patient by a reduction in the ‘break over’ point of the basket when moved over the handrails of the machine it is being lowered from,” Bradbury said.

“At the same time, [it] safely guides the basket down, eliminating the chance of the basket from tipping side to side or flipping completely over as it can if totally suspended by ropes alone without the JB1.”

Bradbury, who has worked at Bear Run for several years as an equipment operator, said that the idea for his invention first came about during a mine rescue competition in 2013 when the mine’s Surface Mine Emergency Team (SMET) was tasked with recovering a dummy in a simulation rescue that had become unresponsive while operating a haul truck. The team quickly found out, he said, that the task was much more complex than it initially appeared.

“At Bear Run, we’ve got five different sizes of truck, shovels of all sizes, and accessing an employee in need of assistance can be a challenge even in the best conditions,” he noted. “And wouldn’t you know, the truck used in the competition was a completely different size than anything we had trained on, and we looked foolish trying to get the dummy off the truck during the competition.” 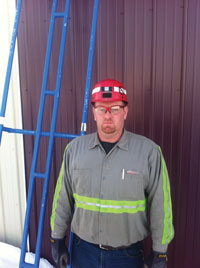 The JB1 Slide and its inventor, Bear Run mine equipment operator Jason Bradbury.

Bradbury said the team knew the issue was the Stokes Basket, the metal frame device commonly used in surface rescues from various locations; while the board keeps the patient restrained the cumbersome basket itself is hard to control and is subject to flipping over and swaying.

Shortly after the event, the veteran miner went into his home workshop and developed a prototype (that first unit saw its inaugural test on a Hitachi 5500).

One of those design features was the slide’s upright outside pipes, which are slightly wider than the Stokes Basket to allow for greater control. He also placed lower-set outside pipes to meet the points of the basket where the rope rigging system is connected.

The JB1 has an optional safety strut that can be used as a secondary load bearing point when placed near the frames connection joints to the ground. Additionally, its modular design was intentional — as it allows the slide to be set to various equipment and heights. With the ability to use all three frame sections or only two, Bradbury said the middle can be left out and the top and bottom sections