Knowing the situation with dust compliance in the U.S., DSI began to research different wet and foam dust technologies. In 2011, the company partnered with a U.S. underground coal operator and began a development process. “After several months of work, we understood that we needed to have patents filed as far as protecting intellectual properties,” said Jim Pinkley, president and general manager, DSI Underground Systems. “We filed two patents, one for the batching composition and the second for the applicator equipment.” DSI now holds patents for the machines and the polymers in the U.S. and South Africa, and patents are pending in Australia.

The 160-gallon capacity DYWIDuster sits on one side of the scoop. Powered by the scoop’s hydraulic system, the machine mixes and applies DYWIDust.

The company then engaged the Mine Safety and Health Administration (MSHA) and the National Institute for Occupational Safety and Health (NIOSH). The NIOSH protocol for evaluation involved underground testing at the Bruceton facilities and working with another underground coal operator in the U.S. DSI completed several underground tests at their site. All of the data was evaluated by MSHA tech support and NIOSH. The evaluation process was completed in July 2013.

Part of the protocol involved building a blast canister that could operate in complete coal dust explosions. Working with the University of Kentucky, DSI built a canister and completed a series of inerting tests with coal dust explosions. “To date, the DSI DYWIDust product, when dry, has never failed a coal dust inerting test,” Pinkley said, “At that point, we felt pretty good about the product as far as how well it would perform underground.”

This is an allowed version of MSHA wet dust product in 75.403, Pinkley explained. “We place a good amount of rock dust on the roof and ribs compared to MSHA’s wet dust,” Pinkley said. “It appears we have better rock dust application.”

“The allowance in 30 CFR is for an application of foam rock dust followed by a dry dust application,” said John McDonnell, technical director, DSI Underground Systems. “The foam dust, when any has tested similarly to dry dusting with inerting explosions and noncombustible material compliance. At the very least, we believe it should reduce the amount of dry dust.”

In July, 30CFR 75.403 was updated with the allowance for the application of foam rock dust. “For any mine using the MSHA wet dust now, this is a similar process that reduces the splash back and makes the coverage more efficient,” McDonnell said. “It reduces the time it takes to wet dust a section.”

DISPENSING DYWIDUST
The mine supplies the rock dust and adds the water and DSI polymer using the DSI dispensing machine, the DYWIDuster. “The mine uses their own C737 ASTM rock dust and we provide them with a set of batching instructions and a best practices sheet,” McDonnell said. “They add water and dust and then the polymer concentrate additive, and then they agitate it to develop the DYWIDust.”

Applying DYWIDust is a two-man job, one scoop operator and one miner manning the applicator wand. The miners load the DYWIDuster into the bucket of a scoop and the mixing process begins. They roll it up to the face and apply the DYWIDust. For a face application, where the mine is taking a 40-ft cut, depending on roof height, Rusty Linn, technical sales and strategic business manager, DSI Underground Systems, estimates that they will cover four or five cuts from each batch they mix, depending on seam height. 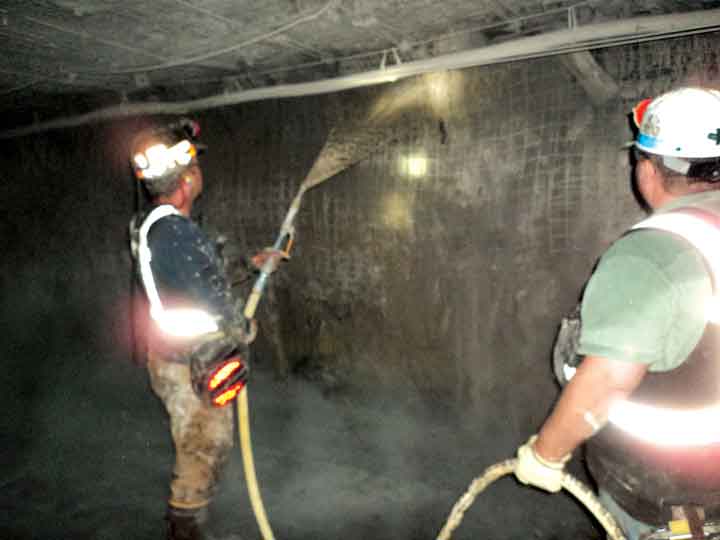 Miners apply DYWIDust: a specially developed polymer helps disperse and suspend water, and also helps the mixture stick to the roof and ribs.

Miners can load the unit and mix a batch in 15 to 20 minutes. The DYWIDuster has two hydraulic lines with quick disconnects. It can be quickly offloaded into a crosscut and the scoop can still be used for other jobs. Essentially the applicator is similar to any other hydraulically powered accessory for a scoop in a coal mine.

From a production standpoint, the continuous miner crews do not have to shut down for a whole shift and evacuate the section to rock dust. “The big advantage, however, is once they pull the bolter, they can start dusting while other people are working in the next entry,” Linn said. “The system doesn’t dust the other miners off the section.”

The polymer keeps the dust in suspension. “We have let a batch sit for 24 hours and then re-agitated it and sprayed it,” Linn said. “They can mix the batch first thing at the beginning of the shift, leave it in the crosscut and then use it when it’s needed.”

One of the things that hinders the MSHA wet dust program was the need to clear the machine at the end of the shift. If the miners left material in the wet duster, after a day or two, it became plugged. The DSI polymer technology — the air bubbles and the foam composition mass, according to Pinkley, eliminates those concerns.

DSI is currently marketing three DYWIDuster models. The 160-gallon unit typically fits into one side of the scoop and was designed for a mid-coal application. They also have a 250-gallon applicator that is more suited to low-profile work, fitting all of the way across the scoop bucket. They also have a 500-gallon unit that is more suited to mid- to high-seam applications. “By having multiple multigallon units, we can match the system with the company’s mining cycle,” Pinkley said.

As far as maintenance, Linn explained that miners simply hose the tank out and spray some of the water through the applicator. “They can even leave some water in the tank and it will be ready for the next day. Anywhere that we have performed demos underground, the operators all seem to like the process and the machine,” Linn said. “It’s easy to use. The miners feel that this system puts more dust on the roof than any other system. They see dry dust fall all of the time.” The polymer does two things, he explained, it helps dissipate the water and it also helps it stick to the roof and ribs.

In February, mine operators will be required to use continuous personal dust monitors (CPDMs) to sample for respirable coal mine dust on working sections of underground coal mines. “With the new CPDMs coming out in December, we believe this will be another tool to help with respirable dust by reducing rock dust application at the working face and/or wherever else it’s needed,” Pinkley said. “This will also help operators comply with the new proposed rules that come into play in 2016.”

As far as eventually replacing dry dust, moving to that next step would be driven more by coal operator’s demand and a facility being available to complete the testing. “DSI looks forward to that opportunity when it is available,” Pinkley said. “DSI really appreciates the various personnel and leadership at NIOSH and MSHA that have worked on this technology with DSI. This group effort introduced a system that will lower overall respirable dust through low respirable rock dust application in U.S. underground coal mining.” 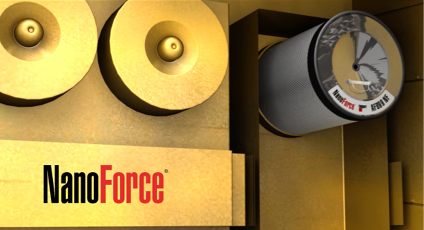 Pay Attention to Proper Filtration — and Profit From It