Faced with a pressing need to restrict dust emissions from its ore handling and crushing operations, Coemin’s Cerillos plant in northern Chile turned to Geometrica to develop an innovative structure design that would enclose a large, irregularly shaped area without significant disruption to existing processes and equipment.

Chile is known worldwide for copper mining — and wine production. In several areas of the country, these two activities coexist. For example, a concentrator facility owned by Chilean-Romanian mining company Coemin, situated at the entrance to Cerrillos Canyon in northern Chile, processes copper ore from the nearby Carola mine. Located 30 km southeast of Copiapó, the mill is in an area that also hosts a number of vineyards, where transient dust from its ore handling and crushing areas is not welcome. The operators of the Cerillos mill had long used preventive measures such as foam sprays and fabric barriers to control those emissions. However, as plant capacity grew, the mill’s owners decided to completely enclose its crushing operations — a challenging endeavor, as existing equipment and conveyors were not laid out with an enclosure in mind. The main area encompassed more than 5,000 m2 (54,000 ft2), in a shape that could only be described as “irregular” following several expansion projects.

The owner’s initial concept for enclosure included two smaller domes plus a large arched vault. However, local suppliers warned that the spans needed for this concept were simply too large and complex for them to handle. As a result, the project architect, Percy Diaz, contacted Geometrica for a proposal.

Geometrica, based in Houston, Texas, and with facilities in Monterrey, Mexico, has designed, manufactured, and installed long-span domes and space frame structures for architectural and industrial clients since 1992.

The Geometrica design team, after visiting the site, found that the concept of a large arched vault had severe drawbacks. Bending stresses were high, truss depth would have to be drastically increased and structural members would be extremely heavy. Clearances for access and interior space would be compromised. A vaulted shape would require modifications to some existing equipment items, without which they would have to remain uncovered. Equipment modifications also would necessitate unwanted plant downtime. 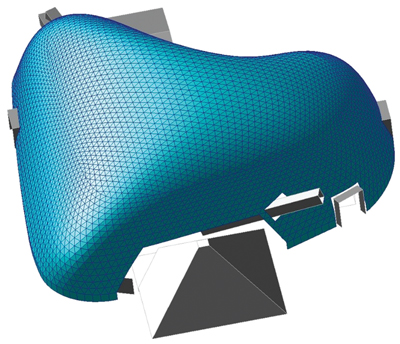 Geometrica proposed a different solution: a Freedome, its trade name for free-style dome designs. The concept prompted Diaz to sketch a free-form plan. Geometrica studied the scope and scale of the new concept, confirmed that the Freedome could be built without increasing the budget, and was subsequently retained to design a dome that would fulfill the very irregular design. The site’s equipment and buildings dictated its shape: crushers and screens had to be enclosed, while a hopper had to remain uncovered. The supporting structure had to bridge existing buildings. There was no way to fit a conventional circular dome on this site. Diaz’s layout was roughly heart-shaped — three-sided with rounded corners and a dimple in one of the sides. The Freedome also solved a major concern: no equipment modifications would be required.

According to Geometrica, the dome was truly a custom design, but precision prefabrication of components enabled installation by local labor, who reportedly had no problems following the simple procedures required to build it.

Construction of the dome started on the foundation and progressed toward the apex, ring by ring. No scaffolding was needed and no plant downtime was required — the rising dome supported its own weight plus that of the construction crews throughout the process. Cladding consisted of rectangular corrugated metal sheets with a polyester finish. 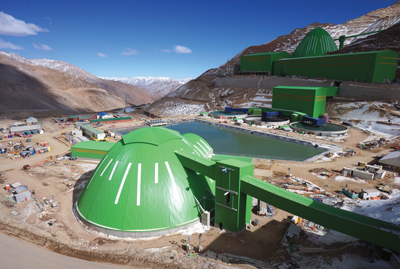 The heart-shaped freeform design, shown here in the computer design stage, met the challenges posed by the site’s size, shape and layout.

The company recently announced that it also had installed what is regarded as the largest dome of its type in South America for SCM Minera Lumina Copper at its Caserones copper ore storage and concentrate facility located 4,000 m (13,000 ft) above sea level in the Chilean Andes, 160 km southeast of Copiapó in Chile’s Atacama Region. The operation is owned 75% by Japan’s Pan-Pacific Copper — a joint venture between JX Nippon Mining & Metals and Mitsui Mining & Smelting — and 25% by Mitsui and Co. Ltd. According to Geometrica, dome design and construction had to overcome challenges posed by the site’s rugged location, freezing temperatures, high winds and scarcity of resources. The domes installed at Caserones must withstand snow loads that reach 800 kg/m2 and wind pressures of up to 300 kg/m2.

At 145 m (475 ft) in span and 94 m (308 ft) tall, the ore stockpile cover dome built by Geometrica at Caserones stands out as a prominent example of its design principles, along with the nearby 52-m (170-ft) copper concentrate storage dome. Both are geodesic-style Freedomes, and illustrate how the free-style design approach takes advantage of form as a structural element and allows domes and vaults to be designed without intermediate columns, eliminating wasted space, and maximizing the unobstructed management of inventory, equipment and personnel. 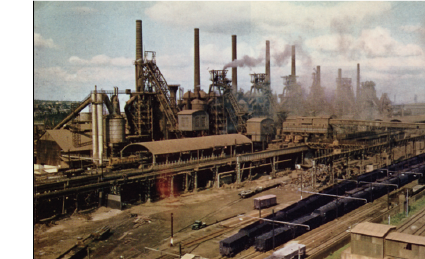