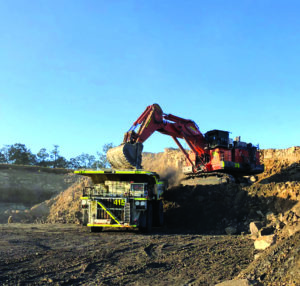 An excavator loads overburden into a haul truck at the Mount Thorley Warkworth mine.

Surrounded by a picturesque backdrop of mountain ranges and eucalyptus forests, the fertile soil of Australia’s Hunter Valley region produces some of the world’s best wines. It’s also an abundant source of coal, a vital part of the region’s economy for nearly two centuries. While tourists enjoy the nearby wineries and golf courses, miners and machines at Mount Thorley Warkworth mine are hard at work, producing 12 million metric tons (mt) of coal annually.

The Mount Thorley Warkworth mine has been in operation since 1981. Owned by Yancoal Australia Ltd., the country’s largest pure-coal producer, it is an open-cut mine that uses a dragline and a truck-shovel method to extract coal. A fleet of more than 100 haul trucks, loaders and dozers are in constant motion, along with more than 1,200 employees working in shifts to keep the mine operational 24 hours a day, seven days a week. The only days off are Christmas and Boxing Day.

After being washed and prepped for sale, the coal is loaded on to trains for transportation to Port Warratah in Newcastle, the world’s largest coal export facility. While some coal is used in Australia, most of Mount Thorley Warkworth’s reserves are shipped to international customers for steel production and electricity generation.

Compared to other mine sites with rich, deep seams, the coal at Mount Thorley Warkworth takes more time to mine. Large volumes of overburden must be blasted and removed to reach and extract the coal. “There’s a lot of hard work to get to the coal,” said Shane Saunders, senior engineering, Yancoal Australia. “For every eight tons of dirt, there’s one ton of coal. In addition, the site’s steep 10% grades place a heavy toll on the engines. The trucks run at full RPM about a third of the time they are in the field.”

It’s critically important that Mount Thorley Warkworth’s fleet of haul trucks are fully equipped to handle the worksite’s challenges. The mine produces 1 million mt per month of coal. With any amount of downtime, the operation slows and revenue is lost. To get the job done, Mount Thorley Warkworth has a fleet of Komatsu 830E haul trucks at their command, each capable of hauling 220 mt.

Putting New Engines to the Test

In 2009, Mount Thorley Warkworth’s first Komatsu 830E trucks were put to work. By the end of 2010, the fleet grew to 35 trucks. Due to the desire to extend engine life and reduce costs, they selected a different engine manufacturer to repower — MTU. Working in partnership with MTU distributor Penske Power Systems, the team repowered several Komatsu trucks with 16-cylinder MTU Series 4000 engines.

Mount Thorley Warkworth’s team of engineers conducted a study and was pleased with the results. Over an 11-month period, the average engine downtime per unit was cut in half with the MTU-powered trucks. In addition, an independent fuel study was conducted. Under controlled conditions, the study revealed that average fuel consumption was lowered with the MTU Series 4000 engine. The mine team was impressed with the uptime and fuel efficiency improvements. Over many hours of operation, the MTU-powered haul trucks generated considerable lifecycle cost savings.

Just like the haul trucks at Mount Thorley Warkworth, the partnership continued going strong. “Penske has delivered MTU engines for the repower of haul trucks at MTW for several years. Over this time, we have developed a very strong working relationship with the customer,” said Jim Livermore, business manager, mining (east), Penske Power Systems. “We have a great understanding of the customer’s requirements and of the conditions in which mining trucks operate, and thus how the MTU engines need to perform.”

A Life Beyond Expectations

The partnership paid off in more ways than one. Over the years, Mount Thorley Warkworth also closely monitored another major factor in operating costs — engine life. The target engine life for the Series 4000 engine was 25,000 hours when first fitted. The team followed a strict preventive maintenance program every 500 hours. When it was time for an overhaul, the reports indicated there was plenty of life left in the MTU engine.

In 2013, engine life targets were extended to 28,000 hours and service intervals moved to 750 hours. “The Series 4000 C01 is a well-designed engine, specifically made for large earth-moving vehicles,” Saunders said. “Every time we looked at our reports, we found the engine was ready for more. So, we kept on extending our targets to see how far we could go. It was a good way for us to cut costs — especially at times when fuel prices rose and coal prices dropped.”

The mine team and Penske Power Systems conducted more inspections of the disassembled engines. A few engines were left in the trucks to run. These engines were closely monitored through oil analysis to find their true lifespan. After they ran for 40,000 hours, they were removed for inspection. Analysis showed this was very close to their limits. To be safe, the target life for the MTU-powered Komatsu 830E trucks was set to 36,000 hours. The life extension has eliminated one engine change from the lifecycle, significantly changing the cost profile of the MTU fitted assets.
All the extra engine longevity across Mount Thorley Warkworth’s fleet of Komatsu trucks has done wonders in protecting the bottom line. “The engine life is more than 10,000 hours beyond our expectations,” Saunders said. “Our trucks operate 6,000 hours a year. When you consider total time between overhaul, these engines are out in the field nearly two more years than we expected. Between engine life, reliability and fuel efficiency, they’re making our operations more competitive. The coal at our site is not easy to get, so we need every little margin that makes us more profitable.”

Repowering several haul trucks with 16-cylinder MTU Series 4000 engines improved uptime and fuel efficiency. Mount Thorley Warkworth’s fleet of Komatsu trucks were initially scheduled for overhaul after 25,000 hours of operation. Engine longevity went well beyond expectations and the overhaul target was moved to nearly 36,000 hours.
“Penske has delivered MTU engines for the repower of haul trucks at MTW for several years,” Livermore said. “Over this time, we have developed a very strong working relationship with the customer.”