The Coal Dipper in action last fall after many hours of work between Alpha Coal West, Wyoming Machinery Co. and Cat.

It’s a mission by every mine: mine coal faster, more efficiently, with less effort. Thanks to a meeting of minds between Alpha Coal West, Wyoming Machinery Co. and Caterpillar Global Mining, one of the nation’s largest coal complexes found that mix in the development of the Performance Series Dipper.

Initially, back in 2012, Alpha Coal West had this very quandary — what kind of innovation could provide improved pass matching, loading up their fleet of nine Cat 400-ton 797F haul trucks in three passes instead of four, essentially providing the same progress rate but with significantly less involved man-hours?

It was a big question to answer, and one that would indeed take some time. How could it be done without making the resulting design more expensive, heavier and more cumbersome than its predecessor?

The goal seemed obstacle-laden at first, but discussions between the group’s members put things into perspective quickly.

“I remember in 2012 we took a trip to Cat headquarters in Peoria, Illinois, with the Alpha team,” said Richard Oates, vice president-mining, Alpha Coal West said. “During our meeting, there was a lengthy discussion on an innovative idea to provide a better pass match for the 400-ton truck by increasing the ‘dipper’ size for the 7495 electric rope shovel. Dipper was a new word to me, as I thought it was a bucket.

“In the late 1990s, Cat introduced lightweight bodies for off highway trucks as a way to carry more capacity, yet staying within the design parameters of the haul trucks. The Alpha Coal West team’s suggestion to lighten the dipper to carry more capacity made sense to us because of our previous experience.”

Alpha Coal West had cooperated with Cat on previous product improvement projects, and they noted that the project to lighten the dipper gained significant traction following the merger of Bucyrus into the Cat family; in particular, the Bucyrus product line that integrated into the Cat line included the 7495 electric rope shovel. A short time later in the fall of 2013, Wyoming Machinery Co. was given rights to represent what is now called Cat’s expanded product line.

So, into high gear the group went into high gear to turn ideas into reality, including a finite element analysis by Caterpillar to design the dipper’s configuration. One issue was creating something that had “reasonable tolerances,” that would also allow for a good lifespan in the notoriously harsh conditions of surface coal. 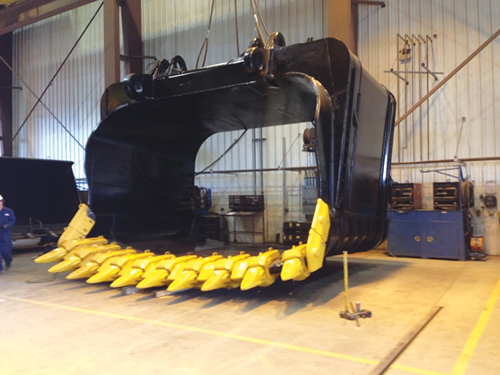 Cat offers an extended servicelip and ground engaging tools, which have generated a three-fold, or 300%, improvement in service life compared to conventional teeth.

“The test had its ups and downs, but Cat came back to the design table with all the data, addressed all the issues,” Wyoming Machinery Co. PSSR Kent Bowker said.

In late April 2014, the first dipper — featuring a 132-ton pass — went to work at the Belle Ayr mine in Gillette, Wyoming, after fabrication of the dipper at Wyoming Machinery’s Gillette plant. The group’s mission, which it met, was to increase the dipper’s capacity from 82 cubic yards (cu yd) to 89 cu yd, thus permitting the 7495 electric rope shovel to load 400 tons in three passes; the re-design removed about 10 tons of material while increasing structural integrity through use of FEA testing, and validation through post-installation strain gauge testing.

Two months and 7,000 man hours later, they had done it — and were now watching it work in real time.

It’s important to note that, contrary to conventional thought, the companies’ goal was not achieved by making the unit heavier. In fact, the design that culminated from the Alpha Coal West, Cat and Wyoming Machinery’s research and toiling actually had a reduced weight versus the former bucket design — and it also added about a foot of height.

“Material type did not have a lot to do with it,” Bowker pointed out, calling the resulting design ingenuity “typical Cat.”

The PSD, which has an expected life of 18 months to rebuild, has now been in use at Belle Ayr for about a year with significant increases in productivity — versus the original 82-cu-yd dipper, the new 89-cu-yd dipper has given the 797 fleet about a 9% increase. 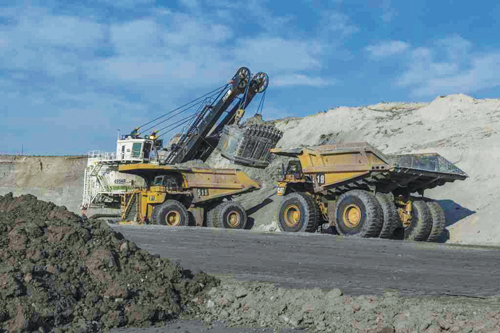 Belle Ayr realized significant increases in productivity versus the original 82-cu-yd dipper; the new 89-cu-yd Performance Series Dipper has given the Cat 797 fleet an increase of about 9%.

All involved note, though, that there have been some modifications to the first Performance Series Dipper along the way as they work to perfect and polish the design. Cat and Wyoming will continue to work with the Belle Ayr mine to fine tune the design as they build the second dipper for Alpha.

The operator and OEM are also considering a ground engaging tools (GET) after Alpha Coal West reported plans to progress with a competitor’s product. Once Cat presented their thoughts, Ferguson said they changed their minds at the mine.

Wyoming tested the new Cat extended service tips in early 2015, which returned a three-fold, or 300%, improvement compared to conventional teeth in the material in which Belle Ayr mines. Thanks to a ceramic material make-up designed by Cat, the teeth can self-sharpen as they work.

Wyoming Machinery Co. and Cat are working on the Cat Xtreme Service GET, which at this time do not have a launch date for commercial availability. The Performance Series Dipper, meanwhile, is ready to grab up more material, and Cat is fielding inquiries.

So, contrary to the old statement, bigger things can come in smaller packages, and collaborative thinking between operations and manufacturing was certainly an arterial factor. “Working with our customer, Alpha Coal West, we have been able to achieve a lower cost per ton with the Performance Series Dipper installed on the 7495 electric rope shovel,” Oates said. “We appreciate the efforts of the team and the cooperation and communication of all involved.”