“No other manufacturer in the world has produced as powerful longwall roof supports than has Joy Mining Machinery,” said Clive Hibbert, product director-powered roof supports and armored face conveyors.

“Since that acquisition, there never has been a recorded major failure involving Joy roof supports,” Hibbert said. Hibbert credits several factors for Joy’s success. “First is operational experience. Joy longwall roof supports are involved in more than 60% of the active longwall mining faces currently in operation in Australia and more than half of all those in the United States, and complete Joy longwall mining systems comprise more than 70% of the single-manufacturer longwalls operating today.

“Much of this success has to be attributed to our engineering team,” Hibbert said. “Joy has a large number of degreed engineers worldwide involved in the design and manufacture of longwall mining equipment.

“These engineers, using advanced analytical tools, consistently produce exceptional designs. They demand the use of high strength steels and incorporate their own-designed advanced hydraulics, which results in the high performance of our supports,” Hibbert said. “Joy requires each component in every piece of mining equipment meets the highest of standards. For example, every roof support structure manufactured is inspected by Joy personnel to ensure detailed processes in the welding are adhered to for the purpose that high quality and integrity are maintained.

“When you have designed and manufactured the strongest roof supports, you have to prove the product adds value,” Hibbert said. “As a matter of routine, Joy maintains the most stringent structural testing in the industry that is applied to our longwall roof supports. At the company’s Wigan, U.K., testing laboratory, Joy has the capacity to test units up to a rating of 2,500 mt (2,755 tons) on roof supports ranging up to 20 ft (6 m) in height.”

This is the highest rated rig capability in the world today, according to Joy. The company put it to use two years ago to validate the design of what it considers the world’s most powerful longwall roof support.

Joy had been asked by Australia’s Moranbah North mine to provide a complete longwall mining solution incorporating the highest capacity longwall roof supports with a never-before-achieved shield yield ratings of at least 1,750 mt (1,925 tons).

“Accomplishing this required a dedicated effort,” Hibbert said. “Where typical shield fatigue testing requirements range between 30,000 and 60,000 cycles, the final fatigue checking on the Moranbah shields successfully achieved 90,000 cycles; something unheard of in the industry, until Joy did it.”

Because leg life expectancy is designed to exceed that of the major support structures, the legs also were tested successfully for more than 90,000 convergence cycles. Joy also increased the leg diameter from 400 mm (16 inches) to 480 mm (19 inches) which, Hibbert said, involved innovative engineering in the design of the cylinders, seals, bearing materials and feed pipes.

“Additionally, Joy designed into the new roof supports an active compensating ram that stabilizes the hinge point between the canopy and the rear of the shield,” said Hibbert. “This was done because Joy engineers had determined that, by both increasing the size of the ram and by activating it at times other than just during shield advance, it enhances the tip loading of the supports during both free standing and yield conditions.

“The end result of these accomplishments is Joy’s highest rated, highest fatigue life longwall roof support that weighs more than twice that of many of the supports in use today,” Hibbert said. “That same effort, the engineering attention to detail and innovative thinking, goes into the design and manufacture of every Joy longwall roof support.

“As has been proven again and again, and proven where it counts most, in longwall mining applications worldwide, under the most severe and demanding conditions found to date, Joy’s record of accomplishment, performance and reliability is un-matched,” said Hibbert.

Mine Drainage: An Alternative Source of Water for Power Producers 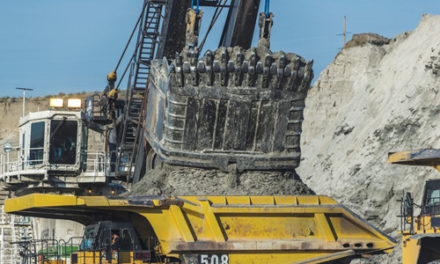