The systems are popular and, as of April 2011, more than 430 plants (or 70% of the Chinese coking coal washing capacity), were using Guohua technology. The systems integrate multiple technologies based on two types of core products: a gravity-fed, heavy-media cyclone and an associated heavy media cyclone for fine coal separation. The company markets a novel flotation system as well.

The driving force behind Guohua Technology (pronounced: gwo-wa) is Founder, Chairman and Chief Engineer, Zhao Shuyan. During his career in Chinese coal preparation, he patented this equipment and other technologies. While China privatized its coal industry, Zhao’s BGTG has flourished. BGTG is now looking to expand in the U.S. and the company recently appointed Sam Johnson president of Guohua Technology Corp. (GTC), which is based in Lexington, Ky. Johnson has accepted the challenge of introducing BGTG’s technology and equipment into the U.S. coalfields, particularly coking coal operations in Appalachia. “We have held several meetings with interested parties after GTC formally introduced itself to the U.S. coal business at Coal Prep 2011,” Johnson said.

In addition to 18 national patents from the Chinese coal preparation industry, more than two dozen international R&D projects have been awarded to research the Guohua technology. BGTG was recognized by Forbes as one of China’s top 100 small enterprises with great potential.

How the System Works

Most U.S. prep plants divide raw coal into two or three streams using screens as the run-of-mine raw coal enters the plant resulting in sizing and desliming of the raw plant feed, which then reports to sumps. From there, coals are pumped to washing circuits based on size. “Pumping coal leads to finer size and thus more expensive to wash. That is why BGTG system is gravity fed,” Johnson said.

BGTG’s design eliminates the sizing and desliming process. “We only size the raw coal to the maximum needed for the cyclone circuit, which is minus 4 inches (100 mm), and that is accomplished before it enters the prep plant,” Johnson said.

For example, the 3GDMC-series, non-deslimed, gravity fed, three-product, heavy-media cyclones consists of two vessels connected in series. The first stage is a cylindrical, barrel shaped cyclone that makes a separation at a set density, followed by a conical cyclone for a second stage heavy-media separation at an elevated density. “This is a two stage process resulting in a low ash product, a middlings product and a refuse product,” Johnson said. “The first stage, the barrel-shaped cyclone, relies on counter flowing heavy media and gravity fed raw coal to generate a low ash product. That heavy-media counter flow material is thickened in the barrel–shaped cyclone before it is discharged to the conical cyclone, and creating a very high specific gravity cut point in the second stage of cleaning. Due to higher velocity or greater centrifugal force of heavy media in the conical cyclone than in a conventional cyclone, the second stage can effectively clean coal particles down to 0.25 mm.”

“When this system is combined with a fine coal heavy media cyclone, the BGTG heavy media process effectively cleans coal down to size at 0.074 mm (200 mesh) without using spirals or Teeter-Bed Separators,” Johnson said. “We are saving operators money several ways, by eliminating the desliming process and the spiral circuits, both require sumps and pumps, resulting in capital savings and operating savings by requiring less energy and maintenance, and by higher efficiency and improved coal recovery.”

For coking coals, the clean product passing the cyclones can be further refined through two stage froth flotation, which BGTG also manufactures, that use a surface tension concept with micro-bubbles. The machine has no moving parts below the surface of the water level. The only moving parts are associated with the launder on the top where the froth is paddled off. “These machines have a long service with limited moving parts,” Johnson said. “The nature of the design with less height and more length translates into lower power consumption.”

A high horsepower pump is required to maintain the volume and pressure. The size depends on the diameter of the barrel cyclone, which ranges from 0.5-m to 1.5-m. The 1.5-m barrel is rated at 550 to 600 metric tons per hour (mtph). The 1.3-m processes 350 mtph. “A mine operator could install a parallel set to increase capacity beyond the larger unit,” Johnson said.

Most of the maintenance is related to wear. Aside from the pump, the system has no moving parts. Guohua is guaranteeing a two-year life on the wear liners it currently uses, based on demand cycle of two shifts per day, five days per week (or 8,000 hours per year). “We are also looking at new liners that may extend the wear life to three years or longer,” Johnson said.

The process is self-contained. “We double clean the water so we are always using super clean water,” Johnson said. “We minimize the need for additional make-up water. It effectively eliminates black water discharge from the prep plant. The system would allow mining companies to do away with the series of settling ponds that are commonly found at most U.S. prep plants.” Using a filter press, almost all of the fines that would have been discarded are recovered.

For a plant looking to expand capacity, the 3GDMC could be installed as a parallel circuit, Johnson explained. It could also be used to replace a poor performing coarse coal circuit.

The zero water discharge is especially appealing to some coal operators. As an example, Guohua is considering a modular unit to work in conjunction with highwall mining machines.

Who Will Take the First Leap?

This is a different coal processing concept for U.S. prep plant operators. Johnson knows several coal operators have attempted to use non-desliming circuits with limited success. Most found the magnetite consumption levels to be unacceptable. “Processing difficult Chinese coals with high clay content, we are seeing magnetite losses of 1- or 2-lb per ton,” Johnson said. “I believe that’s an acceptable loss.”

Depending on the size of the plant, Johnson thinks the Guohua technology will save $1 million on capital expenditures by eliminating the desliming process and the spiral circuit. “Capital-wise, it might be 10% to 15% cheaper, but that also depends on the application,” Johnson said.

Buying Chinese equipment and shipping it to the U.S. seems like a complicated process. Johnson reassures prospective customers, explaining Guohua is a fully-integrated organization. “They have their designs, patents, intellectual properties, etc., but they also have the foundries and machine shops to make the equipment,” Johnson said. “Many of the items can be assembled as modules and shipped by sea to the nearest port of entry and then onto the site and erected. In some cases, we will ship the components and then do a traditional stick-built design. It depends on the size of the plant. We prefer to use regional construction companies to develop a winning combination.” Guohua will stock replacement parts at the plant or regionally as the business develops.

GTC will soon place a demonstration unit at the University of Kentucky’s coal lab. “We will bring in drum size samples to test and profile coals in advance,” Johnson said. “We are currently performing test work on other international projects.” A coking coal operation in Appalachia would be the ideal candidate.

The Growing Popularity of Sustainable Mine Reclamation 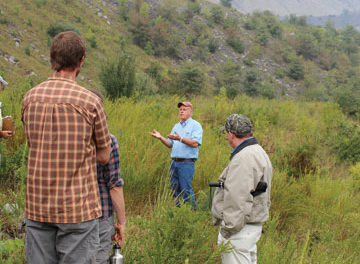 Restoration Project Builds on its Past