Ukraine Shuts Down Coal Mines Under Green Deal With EU 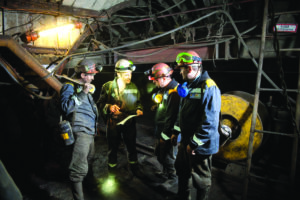 A shift superintendent holds a meeting with miners at DTEK’s Blahodatna mine in Ukraine. (Photo: Euracoal)

In July, the Ukrainian government launched a pilot project to shut down coal mines and establish a carbon-neutral economy in Myrnograd, Donetsk, region, and Chervonograd, Lviv, region.

The move is part of the Ukraine-EU Green Deal and is partly funded by Germany, which allocated EUR 35 million ($41 million) under the pilot project. Under the Green Deal, Ukraine intends to close up to 90% of coal mines in the country by 2030.

“The scale of the transformation program is broad, covering 60 areas in five regions, with a population of 1 million people,” Ukraine Prime Minister
Denis Shmigal said.

Shmigal promised to establish new production facilities and develop infrastructure in the involved areas to replace coal mines and avoid unemployment. For example, the government hopes to turn Myrnograd into a popular tourist destination, rebuilding some coal mines into museums to attract visitors.

In 2020, Ukraine produced 28.8 million metric tons (mt) of coal, 7.7% down compared to the previous year, the State Statistical Service estimated. In total, 148 coal mines were registered in the country, including 102 state-owned, of which 67 are located at the territories controlled by pro-Russian rebels and are not reflected in official statistics.

This may be a first step in a major sell off campaign, as DTEK is reportedly mulling plans to get rid of coal mines and thermal power plants, according to Maksym Timchenko. Timchenko told local press in July the Ukrainian mines may be put up for sale only if there were a clear economic rationale behind this move, “otherwise they would continue operation.”