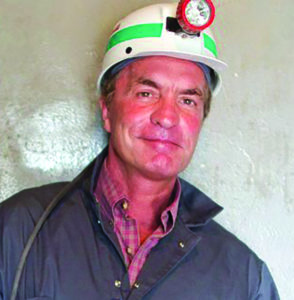 West Virginia coal billionaire and philanthropist Chris Cline died in a helicopter crash near the Bahamas on Thursday, the governor said.
Credit: Andrew Harrwe/Bloomberg via Getty

Shortly after takeoff on July 4 near Grand Cay in the Abaco Islands, Bahamas, a helicopter crashed killing all seven people on board, including billionaire and coal industry developer, Chris Cline, 60. The helicopter was headed for Fort Lauderdale, Florida. The helicopter was reported missing 12 hours later after it didn’t reach its destination.

Cline’s daughter, Kameron Cline, 22, as well as her friends, Brittney Layne Searson, 21, Jillian Nicole Clark, 22, and Delaney Lee Wykle, 22, were among the victims. Family friend, David Jude, 57, was also killed, as well as the pilot, who was identified as Geoffrey Lee Painter, 52, of the United Kingdom.

According to multiple news sources, the aircraft took off around 2 a.m. to get Kameron Cline to a hospital because she was experiencing a medical issue while on her father’s private island near Grand Cay. Authorities discovered the aircraft overturned in 16 feet of water, local police said.

An investigation was initaited by the Air Accident Investigation Department (AAID) of the Bahamas Investigations. A cause or contributing factors that led to the crash have not yet been made.

The wreckage was salvaged and shipped to the United States where a reconstruction and analysis is taking place by the National Transportation Safety Board (NTSB).

Attorney for Chris Cline, Brian Glasser, released a statement from the family following their loved ones passing.

“This loss will be felt by all those who had the privilege of having known them. Chris was one of West Virginia’s strongest sons, an American original, full of grit, integrity, intelligence and humor, a testament that our hopes and dreams are achievable when we believe and commit ourselves to action. Our sister, Kameron was a bright light to all who knew her, loving, smart, compassionate and full of joy and enthusiasm for life and other people. Their legacy of love and inspiration will live on through all of us,” the statement said.

The family asked for prayers and privacy during this time.

Several people took to twitter to offer their condolences.

“Our families go back to the beginning of the Cline empire-Pioneer Fuel,” he said. “Chris Cline built an empire and on every occasion was always there to give. What a wonderful, loving, and giving man.”

“Chris’s generosity to our research and athletics programs has made a mark on Marshall University,” he said. “I am praying for his family.”

Executive Director of the United Way of Southern West Virginia Michelle Rotellini also released a statement. Wykle’s mother, Paula, was a board member, and the Cline family was also involved in the organization.

“Chris was a generous donor to our United Way, always there to give back any time we asked for a little extra help to meet
a goal or close a campaign,” Rotellini said. “He had a love and passion for West Virginia that we can all relate to and appreciate. Chris was a hard worker, a smart businessman, a friend to many, a charitable man and a loving father who has left this world too soon.”

Cline began working as a coal miner in southern West Virginia in 1980 at the age of 22, following in the footsteps of his grandfather and father before him. He formed his energy development group, the Cline Group, in 1990. It eventually shifted its focus to coal reserves in the Illinois Basin, and he formed Foresight Energy in 2006. Foresight Energy is a leading producer of thermal coal, with nearly 2.1 billion tons of coal reserves. According to Forbes, Cline’s new worth is $1.8 billion.