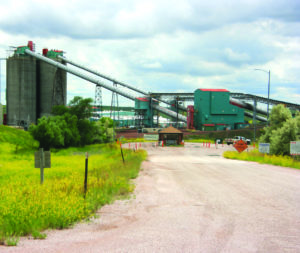 The entrance to the Belle Ayr mine, Wyoming, is blocked after employees were sent home after the company declared bankruptcy. (Photo: Vikki Strande, former employee)

After filing for bankruptcy on July 1, Blackjewel LLC, which owns assets in Wymoing, West Virginia, Virginia and Kentucky, has received approval for the sales of most of its mines.

“The company believes the proposed transactions generate the maximum value possible for each of Blackjewel’s assets, provide a path to reestablishing safe, sustainable operations and, importantly, get the majority of our employees back to work,” the company said in a statement.

A judge approved the sale of Blackjewel’s mines in the Powder River Basin to Contura Energy.

U.S. District Court Judge Frank Volk approved the sale on August 6, which includes the Belle Ayr and Eagle Butte thermal coal mines in Campbell County, Wyoming, and the S-7 surface metallurgical coal mine, also known as the Pax mine, in Fayette County, West Virginia. Contura sold the mines in Wyoming to Blackjewel more than a year ago.

“Contura’s divestment of these PRB assets over a year and a half ago was a strategic decision to focus on our met-heavy eastern asset base, and while that remains our strategic focus, our considerations changed when Blackjewel declared bankruptcy,” said Andy Eidson, interim co-chief executive officer. He added that “the most prudent path forward is to reacquire these mines to reestablish operations, resume safe and responsible coal production, and bring hundreds of miners back to work.”

Initially, Contura’s bid included a deposit of $8.1 million and an additional $12.5 million in cash, for a total of $20.6 million. However, after a three-day auction, Contura’s bid jumped to $34 million.

Contura said it would be able to reinstate 500 jobs immediately. It also said it would resume normal operations as soon as possible.

In the court hearing, Judge Volk also approved the sales of Blackjewel’s other assets, including the Black Mountain and Lone Mountain operations to Kopper Glo Mining; Virginia Subdivision assets to Rhino Energy; Paradee mine to Coking Coal; and LM6 mine to Tye Fork Coal Co. Inc.

Attorney for Blackjewel, Steven Lerner, said, “We hope we can consummate the offers as quickly as possible.”

He added that the parties will determine the next steps moving forward to wrap up the estate.

Blackjewel also received approval in a previous hearing to terminate the 401(k) plan, which will make it possible for employees to access their savings.

After filing for bankruptcy, Blackjewel sent nearly 700 employees home at its Eagle Butte and Belle Ayr mines after then-CEO Jeffrey Hoops said financially they could not keep the mines running and couldn’t afford to pay workers. On July 10, more than 140 employees returned to work, but the rest remain unemployed.

During bankruptcy hearings, Volk approved an emergency loan for the company and a debtor-in-possession (DIP) loan. A $5 million emergency loan was used to provide security measures at the mines, professional fees, U.S. trustee fees and emergency expenses. The plan was contingent on Hoops resigning as CEO and required any family members to resign as well. It also named Dave Beckham as acting chief restructuring officer. This loan was not used to compensate employees.

Shortly after, Volk approved a $2.9 million DIP loan that was used to extend health insurance and workers compensation policies to keep employees insured through July 31.

However, at the beginning of proceedings, Volk denied a motion to approve an emergency financing plan for a $20 million DIP loan, which the company said would kept it from having to liquidate assets. The loan would have been funded by Hoops and his investment company Clearwater Investment Holdings.

Volk said the terms of the agreement would have “unduly prejudice the rights of other parties and interests.”

According to court documents, the company has “insufficient cash to operate their businesses” and additional liquidity is needed,” the court document said.

The company owes at least $500 million in coal royalties, penalties, goods and services, and taxes. This includes $60 million to the U.S. Department of the Interior, $5 million in penalties to the Mine Safety and Health Administration, and more than $10 million to the Internal Revenue Service.

The company also must deal with a lawsuit filed by a Gillette employee of Blackjewel, David Engelbrecht, against the company.

Engelbrecht is seeking 60 days’ pay and benefits from Blackjewel, which the lawsuit alleged violated workers’ rights under the Worker Adjustment and Retraining Notification Act. The WARN Act requires at least 60 days written notice of a termination, along with paying outstanding wages and other benefits.