Very early warning, air sampling smoke detection (ASD) has traditionally been thought of as a technology only suited for clean environments. Many fire industry professionals believe that factors such as dirt, dust, moisture, vibration and other harsh conditions preclude the use of air sampling smoke detection because of nuisance alarms and detector maintenance issues. This is unfortunate because harsh industrial environments have a much greater risk of fire than the standard clean environment.

Possible fire hazards in industrial facilities include very high-voltage electrical cabinets, large motors, conveyor belts, lubricants, flammable liquids, moving parts causing friction and less-than-ideal housekeeping. Industrial facilities also tend to have ongoing maintenance activities, such as welding and metal cutting, that can set in motion smoldering and a possible fire situation well after the work has been completed. For these reasons and others, very early warning, air sampling smoke detection would provide great value to an industrial facility.

Because of a worldwide risk audit of major mobile mining equipment, an international mining company was interested in evaluating secondary smoke detection options in one of their P&H 4100 electric rope shovels. This type of equipment has very high-voltage and hydraulic/lubricant potential fire hazards. It also has all the aforementioned operational challenges for air sampling smoke detection. The electric rope shovels, being the beginning of the ore processing supply chain, mean any disruption at this point would cause problems throughout the production process. As in most industrial facilities, the cost of lost production would be much greater than the cost of the lost equipment. A recent fire at a Canadian gold mine’s processing facility caused the stock exchange-listed company to issue guidance regarding their 2012 production, and the stock price dropped 25%.

The mine’s mobile maintenance department also realized the value of the ASD data for preventative maintenance. Under normal operations, motors and other pieces of equipment used in the shovel should not produce smoke. The presence of a significant amount of smoke in these areas might not lead to a catastrophic fire, but could be a signal of an impending equipment failure.

The mobile maintenance department knows that early detection of an impending equipment failure can provide for a quick reaction that will save maintenance costs and avoid unplanned downtime. Due to the high cost of replacement parts, labor and above all, lost production, these professionals understand an early warning ASD system can easily pay for itself by detecting one potential equipment component failure.

The engineering drawings from the shovel manufacturer could not be easily obtained, thus site surveys and hand measurements had to be taken. In an industrial design, there are a number of challenges regarding system component placement. Operators and maintenance crews will have a lot more interaction with a smoke detection system in this environment than the workers in a standard office or warehouse. The system was designed with two zones. The first zone (Zone 1) was designed to protect the electrical cabinets with both in-cabinet sampling and cabinet exhaust ventilation sampling. The second zone (Zone 2) was designed to protect the lubrication/hydraulic room and the exhaust vents of the hoist and swing motors.

Blazemaster CPVC pipe was used as the main sampling air transport pipe with 3-mm sampling holes field drilled and labeled. Capillary tube and sampling bulkheads were used to sample in the electrical cabinets. The detectors, a 24-DCv power supply and battery backup were pre-wired and attached to a single mounting plate. The detectors were offset from the main mounting plate with anti-vibration spindles. The displays with annunciators were installed in the operator cab, but all indicators were turned off so not to disturb the operator with alarms during the test period. In the case of a sole operator in a production environment, constant or unexplained alarms will result in the removal of the system. 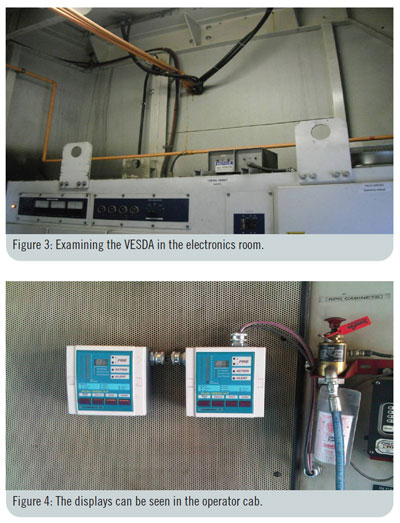 The installation was performed during the week of June 20, 2011, coinciding with a major maintenance “down” scheduled for four days. Working in an active mining environment under a strict timeline presented a number of challenges for an installation team. The scheduled startup of the shovel back into production was not going to be delayed due to delays in the installation of this demonstration system. This factor makes steps like the pre-installation assembly of the detector-mounting plate an important function that saves the installation crew valuable time.

The installation crew also had to work around the maintenance crews performing scheduled work and then wait for assistance when required. When working on a major mine site, another project management challenge is the strict enforcement of federal mine safety regulations and company safety policies, which can create long time delays. One example is that, at 1 p.m. every day, the worksite had to be cleared for a 2 p.m. blast and a 3 p.m. all-clear signal. These and other safety-related factors contributed to long hours for the team and also some deviations from the original design. Although many of the factors resulting in lost installation time can be identified, a project manager needs to build an educated guess of unknowns into the schedule.

Every industrial environment will have a different operational profile, and the corresponding background particulate levels will differ between industry and even specific process. In some applications, the particulate levels will be relatively stable, and in others, there can be sharp unexplained spikes in levels. This is the reason why, for industrial applications, a sufficient background particulate data collection period needs to be determined. Each application will have a different time period that is decided upon by discussions with the operational personnel and a determination of possible changes that could occur. The operational profile of an electric rope shovel is extremely dynamic because of multiple external factors, and it was decided that the test period of a minimum of six months would be required to determine the suitability of the system for the application. The test ended up running for a seven-month period from June 25, 2011, to January 31, 2012. This time period was also chosen because it covered both summer and winter months.

Early in the test period, the shovel experienced an “arc-over” in an electrical BUS cabinet that automatically shut down the shovel. After an examination of the detector’s recorded data and consultations with the mobile maintenance department, it was determined that the incident was detected by the Zone 1 detector approximately 1 minute before the automatic shutdown, with the obscuration level immediately reaching 10% obscuration per foot and the detector going into a Fire 2 alarm. About 20 seconds later, Zone 2 went into Fire 2 alarm, reaching 3% obscuration per foot due to the dissipation of the smoke throughout the space. It took about an hour for the detectors to return to normal operational levels.

It is believed that, once equipment-specific alarm levels are set and the shovel operators are comfortable with the accuracy of the alarms, it would have been possible that some sort of preventive action could have been taken to reduce the severity of the disruption.

The test was determined to be a success, and it was decided that a permanent system be installed using the lessons learned. The mobile maintenance department requested the addition of a third zone to isolate and protect the critical high-voltage electrical components with the highest probability of fire. They wanted the added addressability to give the operator more information about the location of the smoke event and, therefore, help to determine the best course of response.

It was also decided that sampling over the electrical cabinet exhaust vents exposed those sampling points to interferences from outside the cabinet. To keep the alarm obscuration levels as low as reasonably practical, the vent sampling points will be converted to in-cabinet sampling points. The final major change was to reduce the amount of sampling holes in the hydraulic zone to cut down on the dilution factor. This zone experiences the most interference from outside factors, and a balance between sensitivity and nuisance alarms had to be considered.

Even though an electric rope shovel is a very specific piece of equipment, the potential hazards and operational challenges can apply to any industrial facility or process. The deployment of an early warning ASD system in an industrial environment is almost always driven by risk management considerations and not fire codes. The high cost of equipment damage and the resulting production disruption makes object protection an important part of a risk management program.

An early warning ASD system is particularly suited to object protection because the ability to route and place the sampling points right next to the area of the potential hazard. A well-designed early warning ASD system can also determine normal operational particulate levels and then can be adjusted to limit the impact of what would be considered a false alarm. However, as the mine’s mobile maintenance department realized during the test, a “false alarm” can be a possible indication of an operational issue that needs to be addressed.

Fight to the Finish 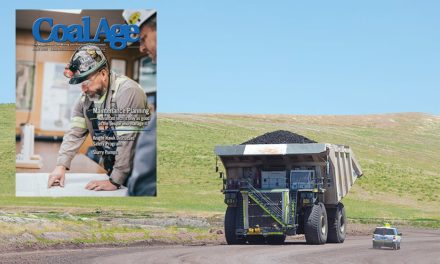 Training for the Disasters