Wet drum magnetic separators have evolved under the assessment of plant operation and performance. Major improvements have occurred in the magnetic element, materials of construction, and ease of operation and maintenance.

The typical magnetic element consists of a series of agitating magnet poles that spans an arc of 120° to 140° as shown in Figure 2. The magnetic poles are arranged alternating from north to south to provide agitation of the magnetite as it is transported on the drum shell.

With the concurrent tank style, the drum rotates in the same direction as the slurry flow. The slurry enters the feedbox and is channeled underneath the submerged drum. The slurry flows through the magnetic field generated by the drum. The magnetite is attracted to the magnetic element, collected on the drum surface and rotated out of the slurry flow. A shortcoming of this basic design is that any magnetite not immediately collected will exit the tank with the non-magnetics.

Essentially, all wet drum tanks used in heavy media applications have leveling spigots and a full width overflow that must be maintained during operation. A deviation in the overflow may result in inefficiencies in the performance and the loss of magnetite. A modification of the counter-rotation wet drum tank represents a recent development in technology for heavy media wet drum magnetic separators. The Self-Leveling tank has no discharge spigots to adjust or monitor. The tank maintains a constant slurry level at any flow rate. This tank is now the industry standard for heavy media applications in the United States.

The Self-Leveling tank operates in the same manner as the counter-rotation tank. The drum rotates against the slurry flow in the counter-rotation tank style. The slurry enters the feedbox and flows directly into the magnetic field generated by the drum. The magnetite is attracted by the magnetic field, collected on the drum surface, and rotated out of the slurry flow. The non-magnetic slurry exits the tank at a full width overflow. The tank continuously operates with a slurry level at the overflow weir.

This tank has several attributes that provide both operational and metallurgical performance advantages. The Self-Leveling tank combined with the 950 gauss Interpole magnetic element has become the standard for wet drum magnetic separators used in heavy media applications.

Wet Drum Sizing and Separator Parameters
The purpose of the wet drum magnetic separator in a coal preparation operation is to recover magnetite in the heavy media circuit. When properly applied, the magnetic loss to the wet drum non-magnetic effluent will be reduced to less than 0.25 gram of magnetite/liter of effluent. This generally equates to a magnetite recovery in the 99.8% to 99.9% range. In order to meet this performance, a number of conditions must be satisfied, including magnetic field strength, tank design and various feed slurry parameters.

Volumetric Flor Rate—Slurry volumetric flow rate is one primary factor in sizing wet drums. Magnetite recovery is directly related to the unit capacity or flow rate through the separator. As the flow rate increases, the slurry velocity and consequently the fluid drag force increases which tends to detach or wash away magnetite particles from the opposing magnetic field. Excessive feed slurry volume will result in increased magnetite losses and a lowering of concentrate gravities.

In heavy media applications, the magnetic loading is based on a value which will give the minimum loss to the non-magnetic product. Much higher loadings are possible, but will result in progressively exceeding the magnetic tailings concentration goal of 0.25 gram of magnetite/liter of effluent. This will result in a deterioration of the magnetite recovery. Further, cleaning performance will be degraded as more non-magnetics will be physically entrapped with the magnetite product. At high levels of magnetics in the feed slurry, a reduction in the feed rate or unit capacity of the separator will be necessary to achieve acceptable magnetite recoveries.

The slurry sizing parameters as well as the magnetic loading parameters for the 0.9 m and 1.2 m diameter wet drum magnetic separators are shown in Table 1.

Sizing charts have been developed for the 0.9 m and 1.2 m diameter wet drum magnetic separators and are provided in Figure 6. These graphs provide the feed rate limitations at any given percent solids as magnetite.

Consider the sizing graph of the 0.9 m diameter wet drum magnetic separator. The separator must be sized within the hydraulic capacity and magnetite content boundaries. The boundaries represented by the outline designate the slurry capacity containing a total of 16 metric tons of magnetite/hour/meter of drum width.

The operating and sizing parameters are based on extensive testing and sampling of wet drum magnetic separators operating in the Appalachian region of the United States.

The intent of this paper was to provide an overview and general guidelines to the operation and performance of wet drum magnetic separators in heavy media applications.

About the Author
Norrgran is the manager of minerals and materials processing for Eriez in Erie, Pa. He can be reached at 814-835-6295 (E-mail: dnorrgran@eriez.com). This article was based on a paper he presented at the International Coal Preparation Congress (ICPC), which was held in conjunction with Coal Prep 2010, during April in Lexington, Ky. The ICPC Proceedings are available from the Society of Mining Engineers (www.smenet.com). 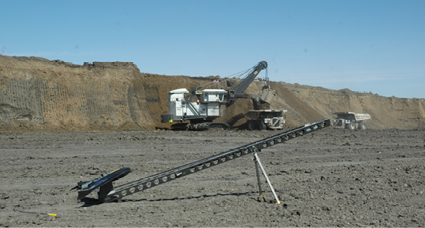