Jack of All Trades

Think back to the mine of yesterday: an expansive fleet of machines, each with its own capabilities, all with their own specific job — in some cases, acquired just for that single task. The bigger the mine, the more lengthy the lineup of vehicles and, as a result, the more maintenance time spent and capital laid out for acquisition, upkeep, modifications and more.

Stepping on-site at a mine today, is a different story entirely. This is especially true over the last several years when operators have become increasingly prudent with their capital budgets and staff and other resources have been forced into consolidation. Equipment makers, responding largely to important customer mine feedback, are producing vehicles with more flexibility and capabilities than ever before, and with the most robust designs for long, efficient lives.

A great example of that shift has been the line of Joy Global loaders, which the OEM integrated into its product portfolio following its 2011 acquisition of LeTourneau. The five loaders — the L950, L1150, L1350, L1850 and L2350 —share not only the flexibility to do the work of multiple machines, including the slower stalwart hydraulic excavator, but also some truly top-line technology. Among these are the Switched Reluc-tance Hybrid Drive, a proprietary electric-drive technology platform that helps allow for higher uptime and a better environmental footprint, reduced waste, and lower fuel consumption, and LINCS II for those aiming for an even higher level of control.

SR DRIVE TECHNOLOGY
SR technology is not new, according to Michael Fleet, product manager for wheel loaders, but the technology has significantly progressed, especially in the years since Joy and Le Tourneau combined expertise.

“As technologies advance, we use the core technology to refine products to give [mines] a huge advantage in operational costs,” he said, noting that among those advantages are fuel savings, a simpler design for reliability, maintainability and even the lessened need for costly, laborious maintenance equipment and man-hours. “It’s more time to dig and produce, [thus] higher profitability.”

In terms of fuel efficiency, the OEM has reported cases where customers saw a 45% reduction in consumption versus a comparably sized mechanical drive wheel loader.

Additionally, the SR Hybrid Drive system is a regenerative process. During braking/retarding, the electrical motors become generators that, in turn, feed power back to the engine’s generator — at a capture rate of nearly 100%.

For loader owners, the SR Hybrid Drive can also keep engine operation at a consistent RPM, saving money for its owner, and with quicker cycle times and less operator fatigue, an operator can also reap the benefits of time savings.

With inherently less moving parts — electric drives have no power-robbing torque converter, no three-speed transmission, no transfer cases, no differentials and no power-transferring universal joints — there is less room for component failures, and often that aids in yet another benefit: longer lifespans.

Commodity prices are low,” Fleet added. “Mines are trying to reduce costs. If [loaders] have moving parts, then they have to be lubed, etc., [introducing] those associated costs.”

Looking ahead, he said design optimization continues with the SR Hybrid technology. It will be featured in the company’s upcoming hybrid excavator/shovel and underground loader family.

DOING MORE WITH LESS: THE JOY LOADER LINE
A review of Joy’s loader choices reveals a wide range of payload lift capacities as well as vast capabilities for any coalfield. The largest is the L2350, with a standard payload of 160,000 pounds of lift capacity (LC); it is also produced in a high lift and super lift version. Featuring standard lift capacities are the L1850, with a 120,000-lb LC, the 90,000-lb LC model L1350, and the L1150, with 76,000-lb LC. Joy’s smallest version, the L950, has a lift capacity of 54,000 lb. All loader models come in a standard lift and a high lift arrangement. In addition to these arrangements, the L2350 also has the super high lift option.

The most popular model from that line, according to Fleet, is the L1850, many thanks in part to their ideal size and ability to run at operations aiming for the absolute lowest operations costs and high production mines. “Overall, it’s the best mix of their needs,” he said.

One great example is the ability of the large loader to blend into the overall operation. For instance, in the Powder River Basin (PRB), “all of those are big mining operations….big equipment, big everything, and it’s a natural fit to match those trucks, loading in four to six passes efficiently.” There are no other large wheel loaders in the same class as the L1850 and L2350 to offer the same loading efficiency. This, too, is where mobility comes in, and in a big way.

“In some areas, we compete against hydraulic excavators,” Fleet said, pointing out that mines that blend their material in the pit can do so much more efficiently with a large loader. Hydraulic excavators travel at 1 to 2 mph at best so relocating them from bench to bench or pit to pit is a time consuming and costly event. A large Joy loader can quickly relocate and be productive in a substantially shorter time frame.

“Capital assets have become more critical, and as these [loaders] have become more robust, they have become a mine loading tool,” Fleet said. It is a trend that is picking up speed: “In the past, it was treated as support equipment. We have clients where it is a production machine and a major part of the fleet.”

Customers, the company said, have justified the purchase of a Joy loader simply for its time savings in relocation. A case in point is the production loss prior to and just after a blast. While the lumbering, cumbersome excavator would need to be moved well in advance with each blast, then walked back into place afterward, the loader could simply be removed from the area and returned as needed with a much better turnaround time.

“It can stay engaged in digging phase much longer pre-and post-blast,” Fleet said. “Some customers have justified purchases just based on that.”

CLOSING THE CIRCLE WITH LINCS II
One of the central features that all of Joy’s loaders have in common is the LINCS II integrated control and monitoring system. The platform, which controls a loader’s functions, allows for vital operating parameters to be monitored and observed with real-time feedback, even sending that data to a remote location for collection and analysis. The result, aside from the obvious benefit of time and cost savings, is enhanced operational safety.

LINCS II can also keep a loader operator from executing inappropriate commands, such as lifting loads beyond the machine’s safe loading weight. Also, a color-coded alarm system provides instant warnings on urgent issues: red alarms for a failure that could result in catastrophic damage or personal injury; yellow warnings for an issue affecting machine performance; or blue preventive maintenance alerts to indicate something is out of tolerance and should be repaired or replaced as soon as possible.

Should a loader operator need to move to another machine of a different model, the same interface can be found across the Joy line — as well as the same build technology from the inside out.

“If a mine owns any one of these models, it can easily operate and be strategic in parts inventory and technology, and operators need to learn only one operating system,” Fleet said. “There is that commonality across all five models.” 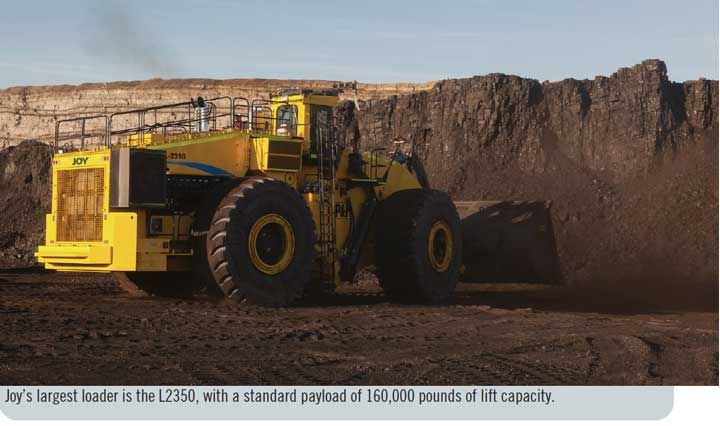 The company said the new machine, at the heart of which is a Tier-4 Final-certified engine, can consume up to 13% less fuel than its Tier 3 predecessor. Additionally, its standard bucket capacity has increased to 9.2 cubic yards; the adjustment now allows the bucket to fill easier and retain material better, as well as provide better operator visibility. 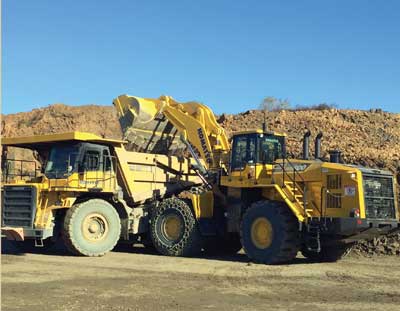 On the performance side, Komatsu’s newest addition combines an enhanced lockup torque converter function and SmartLoader logic to achieve low fuel consumption and high travel speeds. Also, its Komatsu Diesel Particulate Filter (KDPF) and other after treatment components are designed in conjunction with the engine for efficiency and long life, and more than 98% of KDPF regeneration is performed passively, with no operator action required or operational interference.

Inside the cab, the WA600-8 includes the KOMTRAX Plus telematics system and monitor to provide crucial machine information to the operator, including KDPF status and DEF-level data along with fuel consumption; this data can even be sorted by operator ID. Additionally, the Komatsu Auto Idle Shutdown reduces idle time and also helps to save fuel.

Operator comfort also considered, the unit has a new air-suspension, high-back, heated seat that softens the machine’s vibrations. Once its operator is ready to go, he or she can reach for the ergonomic seat-mounted electronic pilot control levers with an F-N-R switch and examine the surroundings with a 7-in. full color, high-resolution monitor and separate full-color rear-view monitor.

Other features of the WA600-8: a variable traction control system and modulated clutch system; full rear fenders with stairs and handrails standard on both sides; a swing-out cooling fan with wider fin spacing and reversing fan; more hinged panels on each side for greater access to regeneration components; a new and enhanced auto-dig function and on-board and remote monitoring of Komatsu integrated load meter data.

Whether purchased, leased or rented, the WA600-8 is covered by the Komatsu CARE program for the first three years or 2,000 hours. 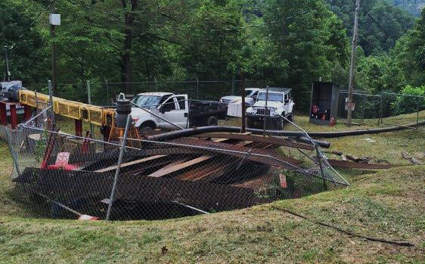 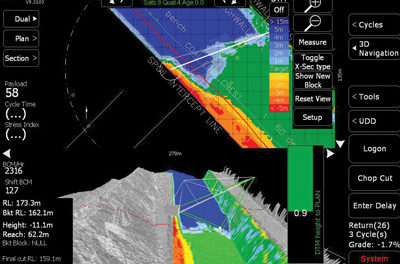