Author’s note: The ultimate goal for the personnel responsible for the power distribution system at a respective mine are safety, performance and reliability. Basically, “nothing” happens but the proper operation and performance of the equipment.

With the advancement of longwall technology, with throughputs approaching 5,000 tons per hour (tph), and belt conveyors with similar capacities, the need to examine and scrutinize the mine power distribution became obvious. Arch Coal’s western bituminous mines, SUFCO and West Elk, recently completed the installation of longwall mining systems exceeding 11,000 connected horsepower. This basically doubles the longwall’s previous connected horsepower. The next question that surfaces is: How to handle power distribution?

Before putting an action plan together, the electrical team compiled a list of goals to be accomplished and questions to be answered. Designed for the projected life of the mine, the electrical distribution system would need to maintain a +/- 5% voltage level during normal operation.1 The power system would also have to ensure stability during the starting of 1,650-hp motors across the line. Would the current 12,470-volt distribution system be adequate for the longwall and necessary support equipment? What are the options? What is the most cost effective manner within proper engineering guidelines?

12.47-KV Distribution
The West Elk and SUFCO mines’ primary power distribution was 12,470 volt. With the increase in load due to the new longwall equipment it was apparent that something dramatic had to be done to improve the power distribution system. An electrical diagram was drawn to develop the basis of the fault/load flow analysis of the respective systems.

This diagram was somewhat simple, but the key points were well represented. The source (utility) is a definite player when it comes to the stability of the system. Details of the incoming power are required. Obviously the thermal demand of the load must be met, but voltage drop across the substation transformer must be accounted for. The transformer may need to be oversized and equipped with fixed taps to compensate for the voltage drop.1 The transmission network is the piece of the puzzle that provides the greatest opportunity to have a well designed, stable system. For the section transformer, the same concerns exist regarding thermal demand and voltage drop. Once again, the same concerns as previously mentioned. Trailing cables and motor cables also represent another opportunity because they can not only be sized for the load, but oversized to minimize voltage losses.

To properly portray the dynamics of the power distribution system, the connected horsepower is not the actual load of the system. A modeling of the longwall cutting sequences in conjunction with the belt haulage systems was developed. The maximum load is established and that served as the premises for the study. In addition to the normal cyclic loading, the across the line starting of the face conveyor motors was also studied. 4,7

In the case of West Elk, to maintain a +/- 5% voltage level,1 a dedicated feed to the longwall panel would be required. Thermally a single 350 MCM cable could handle the amperage but would fail catastrophically in maintaining voltage level to the load. Also, the control circuitry would fall out when trying to start the face conveyor motors. Therefore, a parallel feed would be required. In addition to the parallel feed, the transformer at the substation would have to be oversized to maintain voltage levels. 1

Voltage Regulation
As per industry standards, it’s critical to maintain voltage levels at the motors terminals. The standard calls for a +/- 5% level.1 If the voltage level is not maintained, problems occur. For example, a 1,000-hp motor with 90% voltage level at the motor during normal operation would draw full load current, but develop only 810 hp worth of torque. The torque varies as the square of the voltage.1 Several choices are available to maintain voltage :
•    The transformers can be high efficiency and oversized to minimize voltage drop. They can also be equipped with fixed, no-load taps, which can compensate for the inherent voltage drop;1
•    The use of voltage regulators or load tap changers can be used to compensate for line losses. These should be equipped with line drop compensation circuitry. Typically these are rated at +/- 10%;
•    The use of power factor correction capacitors can be of benefit if applied correctly; and
•    Cables can be oversized to minimize transmission losses.
Another important consideration is automatic voltage level compensation equipment. Most control equipment is designed around a voltage standard of +10% and – 15%.1 If the voltage compensation is greater than 10%, when the equipment shuts off, the belts go down, the over-voltage to the control circuitry could result in nuisance and random failures.
Finally, the use of constant voltage transformers will maintain the control circuit integrity within a range of + 10% /-20% continuous load, +10%/-35% temporary sag.2

Options?
The load flow analysis indicated the need of a dedicated parallel transmission system to support the longwall and associated belts on the panel. This is required to maintain the voltage during normal operations and motor starting. The cost of a parallel feed, modifications to equipment, and labor to install is staggering. This opened the door to alternatives.

The alternative is 21.6KV distribution. The technology is proven. It has been used for years on the draglines in the Powder River Basin. A single cable can be used to power the longwall and associated equipment. The voltage regulation is excellent. But as with anything there are trade offs.

This option was selected at West Elk and Sufco. With the dual feed into the mine, both 12.47-KV and 21.6-KV, the resultant voltage regulation on both circuits is excellent. The existing equipment can be use in the 12.47-KV circuit. The purchase of new equipment can be focused on the 21.6-KV circuits.

Challenges
The surface distribution equipment for 21.6-KV is readily available, but the underground equipment is prototype. The hurdles in the design of the equipment include:
•    Electrical clearances while keeping the equipment as small as possible (Surface mines don’t have to be too concerned about size);
•    Proper termination of the 25-KV circuitry;
•    25-KV bus located inside the power centers and switch gear;
•    No unshielded cable available;
•    Transmission cable connections (The length that can be handled underground is about 1,000 ft. What to do with splices or connection points?); and
•    Partial discharge “corona” issues. 5
The electrical clearances basically double over those required by 12.47-KV.3 Solid bus is not a good application for equipment that is being moved underground. The traditional 15-KV cable bus was used, but it was treated as bare bus in regard to clearances. Clearances were reduced by the use of heat shrinkable tubing for bus bars. 6

Proper termination was accomplished by using commercially available, properly rated terminations. Size of equipment is larger because of the 25-KV rating. Unshielded cable rated at 15-KV was used for internal busing but is treated as bare bus. This is used in conjunction with bus coating.

Transmission line connection points were a matter of concern. The following was investigated and this resulted in the selection of a 25-KV cable coupler. The coupler is undeniably the safest way to handle connection points.

The mining standard for 25-KV portable circuits is the use of “potheads” and junction boxes, “rabbit boxes.” This has proven to be reliable and safe for the handling of 25-KV circuits. The cost of the “pothead” termination is approximately the same as a cable coupler.

The cable coupler has several advantages over a junction box system. The coupler is more robust and doesn’t require special care when handling cables. Once the dust cap is installed, it’s ready to move. The use of the cable coupler also eliminates the possibility of accidental phase reversal. The breaking or opening of a cable coupler will drop out the associated circuit breaker (only one interlock). Couplers offer higher system reliability (no lid switches to contend with). Personnel exposure to 25 KV while making connections is limited and the couplers provide superior protection against moisture.

The selection criteria dictated that the system would maintain required Basic Impulse Level (BIL)1,3 and control partial discharge “corona”.5 It would have to use the preferred contact connection type. Gear-mounted equipment would be afforded the same design as the line plugs.
Regarding coupler selection, again the BIL would be appropriate with clearances maintained on both line plugs and gear mount equipment. Partial discharge would be controlled by removing air as the coupler is made up. The contact type would be one that is preferred by Arch Coal. Gear mounts maintain integrity of the system.

An added benefit of the cable coupler system selected is that the cables are genderless. They cannot be installed backward. And, the possibility of high level, phase to phase faults, are minimized due to design.

SUFCO’s Experience
SUFCO has had 21.6-KV power systems in operation for more than three years with minimal amounts of downtime attributed to it. A few problems were encountered.

Figure 4 shows what is left from a rubber boot on one of the phase leads from the gear mount side of a 21.6-KV receptacle. The deterioration of this boot was the first indicator of something more serious at work. The receptacle vendor was contacted and it was determined that ozone was the cause of the deterioration. Fortunately, the boot was not critical, its primary purpose was to hold the potting compound until it had set during installation. The vendor is looking at using a different type of rubber that is more resistant to ozone in the future.

To prevent this from causing future problems SUFCO worked directly with the manufacturer of this equipment to find a solution. Corona and partial discharge are not new problems. The only difference is with the higher voltage level and the fact that there are no 21.6-KV rated non-shielded cables. This requires that all non-shielded 21.6-KV cables be treated as bear copper conductors except where appropriately rated bus bar heat shrink is used. This allows the clearances to be cut in half. 6 More care must be taken to maintain clearances. The affected compartments were re-worked to provide more room between conductors.

On another instance it was noticed that a partial discharge problem was occurring. In working with the vendor it was discovered that an air void had occurred between the device and conductor. This led to partial discharge occurring which in turn deteriorated the insulation as shown in Figure 7. To solve the problem a different style of voltage sensing device was used and has functioned without issue to this date (Figure 8).

The conversion to a hybrid, 12.47- and 21.6-KV system was the best solution for the power distribution issues resulting from the increase in the longwall’s connected. This decision resulted in the most cost effective way to power the longwall and associated equipment. Also, keeping the 12.47-KV distribution to power belts, continuous miner sections, and support equipment removed that load from the 21.6-KV bus resulting in increase maximum range or length of the system. There is also a side benefit asset management.

Finally, the 21.6-KV system has performed as planned. Arch Coal has not experienced a 21.6-KV coupler failures. The only issues that have surfaced are an increase in appearance of partial discharge in the distribution equipment. No distribution equipment failures, but it is something that is being inspected frequently. 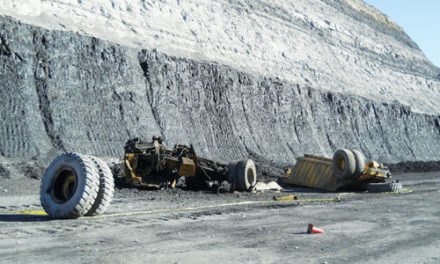