Scoops and shuttle cars, without a doubt, are the workhorses of any continuous operation, and as such they naturally are a source of endless scrutinizing by operators and original equipment manufacturers (OEMs) alike. Both are always looking for the all-in solution to provide higher and more efficient production, safer operation, reduced emission, decreased maintenance, consumables replacement and more.

Improvements are being made at the research and development tables and are being brought into design in many of these areas. Even better, nearly all of the industry’s major players have been working diligently over the last few years to keep this technology quite literally at the cutting edge.

The aftermarket and rebuild segment of this area is also getting plenty of customer feedback on needed improvements, and the vendor arena is listening carefully. Below are a few examples of this work put into action.

Pursuing the Lowest Cost per Ton

The concentration for Wisconsin-based Joy Global as of late has been on continuing its lowest-cost-per-ton mission, and in the area of its scoops and shuttle cars, that focus has been two-fold and related to hardware. The first is the 550V DC, its variable frequency drive (VFD)-conveyor system is designed to help match up the discharge rate of the shuttle car to the belt infrastructure on which the tonnage is being loaded.

This Joy motor design, which is permissible, does not require encoders, as the Joy motors are matched and “tuned” to the VFD drive. Additionally, the Joy system requires just two drives to run all four VFD motors.

Because there are fewer components loaded into the system, it is easier to troubleshoot, resulting in reduced downtime, and the DC VFD’s drive enclosures are internally cooled.

According to Joy officials, its current proven AC VFD drive units have been redesigned to accept a 550-VDC input, which permits DC voltage to be supplied directly, eliminating the need for any DC rectification internal to the drive unit. Moreover, relocating the DC rectification off the machine allows for a second motor output without increasing the drive unit package size.

“That DC voltage is then converted into a variable frequency AC output voltage between 5 Hz through 90 Hz; this is the same as in the current proven AC VFD drive units,” the OEM said.

Joy Global is also spotlighting the globally approved OptiDrive system for shuttle car conveyors, which increases conveyor system and component availability and reliability by reducing the shock loading to all key parts of the conveyor drive. A new AC-conveyor motor utilizes the same mechanical package as the existing conveyor motor. Motors are mechanically the same as the non-VFD motors, and the new designs have been based off of proven Joy conveyors already in use.

The OEM also said that the windings have been redesigned to optimize the VFD outputs, and there is now a single conveyor motor part number for voltages and frequencies, making life easier for mines’ maintenance staff.

 The incorporation of Fairchild’s equipment with GE’s Invertex technology has resulted in a new generation of underground mining equipment that offers operators optimized performance and efficiency underground and also improves driver control, diagnostics and driver communication.

After spending years producing equipment and purchasing internal hardware components from third parties, GE decided to bring its various content together and develop much of it internally. The result was its Invertex drive system, which it began installing on its locomotives and surface mining equipment during the 1990s.

With the acquisition of the assets of Fairchild International, GE Mining expanded its product offering to underground mining and grow its customer base. In 2012 at MINExpo, the company unveiled its Invertex Electric Drive Systems for underground vehicles, which combined GE’s breadth of engineering, propulsion and motor leadership with Fairchild’s industry underground product knowledge and expertise.

The components of Invertex technology have been added to numerous models of GE Mining equipment, the latest being for coal scoops.

Much like its 2012 announcement, the move to place Invertex on its scoops was the result of changing customer needs. In this case, to support the migration of many from DC to AC drive technology. One of the biggest draws to that trend has been a lower life cycle cost, which GE Mining has also helped its customer mines realize. “GE’s Invertex drive is designed to maximize this advantage,” he added.

Marrying the company’s Invertex technology with its line of scoops has improved the overall package in more ways than one. For one, the OEM was able to improve upon its low-profile battery-powered coal scoops by incorporating the GE Invertex drive system; also, its battery electric Invertex system emits no diesel particulate matter, which reduces noise and heat generation while also improving air quality (versus diesel scoops, from which GE Mining said the domestic coal community is largely removing itself). Having one package, all developed by GE Mining, also has benefits from the customer service/OEM support perspective.

Moving ahead with the success of its scoop integrations, Klinko noted that the company is now looking for other opportunities for technology transfer. One of those is expected to see an official launch in 2016: a plan to leverage the Invertex drive and GE Fairchild’s platform capabilities to launch a new 7T battery-electric drive LHD for the hard rock underground market.

In addition to the Fairchild line, GE also now owns Australian-based Industrea. Both acquisitions closed in the second half of 2012.

 Phillips Machine provides both new and rebuild units to the coal industry.

Monitoring of nearly every facet of mining has exponentially grown in popularity as the technology with which to achieve it has gotten more and more advanced. This also extends to the monitoring of a mine’s fleet of scoops, shuttle cars and other mobile equipment.

It is no surprise, then, that Phillips Machine has been receiving very positive feedback from operators on its MineLink system, an online monitoring system for underground equipment that provides diagnostics access from any Internet-ready device. From tonnage to oil temp-erature/pressure and motor and conveyor current/speed, MineLink can provide everything in real-time; capabilities also include incline degrees, equipment operation time and motor overloading/overheating status.

In fact, there are currently more than 50 different alarms that can be customized for a mine and set to go off within parameters dictated by each user. Operators can also receive email or text alerts when alarms are activated, sent right to a mobile device or tablet. At the end of each day, all MineLink-linked units can be scheduled to undergo a system backup.

If a user needs to be to be added or removed, or if an alarm needs edited, all can be easily done from the system’s administration console. If a problem arises and OEM support is ever needed, help is just a click away once the user submits a trouble ticket through the system.

According to Phillips Sales and Marketing Director C.R. Allen, monitoring is an exciting part of the company’s lineup, but it is also always looking at mines’ feedback to make its offerings even better.

“Currently, Phillips is working on projects that reduce total cost of ownership (TCO) for our OEM products,” he said of the company’s R&D efforts, adding that the biggest issues being heard from its customers related to issues with the U.S. Environmental Protection Agency (EPA), permitting problems, and of course the ongoing concerns with project financing and output prices.

These worries also extend to the costs of adding or replacing a mine’s machines, be it a scoop, shuttle car or any other piece of a mine’s fleet. While saving money may be the easiest avenue to take now, it could create issues later.

“Most of Phillips’ customers have cut their buy/build/rebuild budgets to the lowest possible levels,” Allen said. “More repair work is being done at the mine and the equipment is being operated well beyond what is considered to be normal. Operating the equipment for extended periods results in short-term savings, but will increase the costs to rebuild in the future.”

To that end, the factors considered when making such a move largely come back to two main things: whether the vehicle matches their mining conditions, and if it fits into the budget.

At this time, its engineering group is focusing on advancements in technology that are currently being used on the surface, aiming to implement these things into the underground environment. Some of these include high-speed data network use, real-time cameras, proximity detection and cableless haulage. It has been busy testing all of these things, particularly since its monitoring system has been such a positive.

“Monitoring the equipment in real-time and scheduling component change-outs is a goal many process improvement professionals are seeking,” Allen said. “Running the equipment longer and increasing the life of components and complete machines, reducing labor costs through the use of monitoring will be more important for the future for underground miners.” 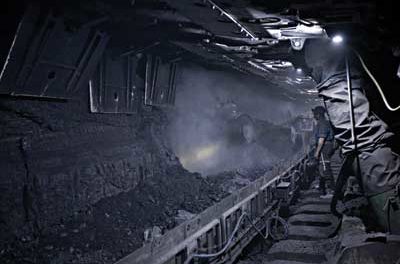