Saving money is nothing new for mines; a conscientious operation will do it regardless of the market. However, what used to be a goal on the balance sheet has become, for many, a make-or-break situation to keep everything going from one quarter to the next.

Consumables and maintenance supplies are arguably two of the largest considerations when it comes to keeping daily operational budgets in check, and in turn, the efficiency of those products are of top concern to the person signing the check. More efficiency allows for nothing but positive outcomes, including higher uptime and, of course, increased safety. Ignore it, and the opposite becomes reality — and energy costs run amok.

According to lubrication supplier Kluber, lubrication is often overlooked as a source of increased efficiency, and the proper selection of base oils and additives is at the heart of that.

Justin Koozer, who serves as cement and mining market manager for Klüber Lubrication NA LP, put the tie between energy costs and mines’ futures into perspective: according to research in 2010 in the Australian Energy Projection to 2029-2030 by ABARE, as much as 15% of operating costs are consumed by energy costs. As electricity costs rise and market volatility deepens, the issue becomes much more vital.

Adding to the scope of the issue, according to Kevin Dickey, executive vice president and global director for Quaker Chemical, is a bit of a perfect storm of both internal and external influences that have forced mines to look harder at every facet of business, every day.

“Not only have we faced increased international competition and a slowdown in exports, but we have also faced the tough internal policy changes within the United States,” he said. “These changes have made it more difficult than ever before for companies of all sizes to maintain their profitability.”

Both Koozer and Dickey and their respective companies are in a unique position to help customer mines through money-saving innovation that also keeps workers safe and an operator’s social and environmental missions in check. In lubricants, an area that so often received criticism for development, use and even disposal, staying ahead of both the market and mines’ needs is central to their businesses.

As Koozer noted, both the economic and social impacts of energy consumption must be considered, and one obvious place to look for savings is in the comminution circuit — which accounts for more than 40% of its total consumption, most of that drawn through grinding.

In fact, he said, it is widely accepted that between 3% and 4% of global electricity is used in mineral crushing and grinding, a figure that suddenly gains significant scope when one considers the level of this work performed across the entire mining industry. That sends capital costs up, which compels mines to look in other areas to tighten up the bottom line. Enter the lubrication factor.

“Lubricant manufacturers have been investigating energy losses through improper lubrication and increasing efficiency through the proper selection of base oils and additives,” Koozer said. “Lubrication is often overlooked as a source of increased efficiency, but if we consider that power losses in a gearbox are largely due to friction and the role of a lubricant is to reduce friction, it is not difficult to see the correlation.”

Gear oil selection for an end user primarily comes down to choosing one of three solutions for base oil chemistries: mineral, polyalphaolefins (PAO) and polyalkyleneglycols (PAG). Mineral oils are the most common type of gear oil, Koozer said, as they are the least expensive and easiest to manufacture, and PAO oils are the most common synthetic base stock.

“PAOs have a similar chemical composition as mineral oils, but the molecules are more uniform in their size and shape,” he noted. “This uniformity creates a more thermally stable oil, which increases the oil lifetime and reduces the friction coefficient.”

Popularity is rising for PAG oils, conversely, because of longer intervals between changes, as well as low friction coefficients and greater wear protection. On the downside, those operations switching to PAOs must examine potential incompatibility with mineral and PAO oils and some seal types. As Koozer noted, however, the advantages often outweigh that.

Gearbox efficiency is another area of concern for many, as the friction coefficient of the gear oil can impact tooth friction losses, which in turn affects efficiency.

“Ideal mineral oils have a friction coefficient of 0.060, PAOs have 0.040, and PAGs have 0.030, according to DIN 3996,” he said. “These friction coefficient values can be further enhanced through the proper additive selection, but it gives an indication that the use of synthetics can save on friction losses.”

It is one thing to measure how much of an effect synthetic oil has in a lab environment, and quite another to measure it in the actual application. Other things play into the scenario, including the condition of the machine and even humidity. Klüber Lubrication recently set out to prove the reduction in power consumption in equipment running in dynamic conditions by changing the oil to a synthetic to prove the economic benefits; the case, which was recorded at an iron ore mine in South America, resulted in significant savings for the operator.

Even with this positive feedback, energy costs will continue to climb. As such, mining companies will continue to be examined for the amount of energy they consume. Koozer said mines will need to search for ways to reduce their power consumption, and proper lubrication can prove to be a powerful tool in reducing this overhead.

“While the impact may be relatively small, the scope of such a project requires little investment, results can be quickly verified, and returns are noticed in a short time,” Koozer said.

“Every person who has any interaction with the coal mining industry is aware that the past years have been particularly challenging,” Dickey said. “The policy changes that have taken place in the United States are twofold: on one hand, we have hundreds of coal-fired power plants that have been shut down and, in turn, decreased demand for coal, and on the other hand, we have increased safety and environmental policies that intend to make mines a safer and better place to work.”

With the resulting increases in costs, paired with smaller markets for output, leaves operations with smaller margins. That, too, is not really news; we have a bevy of mine closures and bankruptcies to prove it.

Consequently, the business environment within the industry itself has changed significantly. Both coal companies and their vendors have had to step back and analyze their everyday business, and as Dickey noted, they now need to quickly revisit business strategies from all possible angles.

“If we intend to survive, now more than ever we must adapt,” he said, adding that Quaker’s mission focuses on operational cost reductions, bolstering safety and re-adapting to those new challenges ahead.

The company’s business strategy moving forward has also changed to adapt to the new normal; historically known as a longwall fluid vendor, Quaker Chemical saw that it needed to add another element — that of consulting with its customers on the best ways to comply to changing regulations and keep on the cutting edge of safety at the same time. The company, already known for being customer-centric and finding solutions to problems while standing on the front lines, expanded with the establishment of the Quaker Chemical safety division.

“Our team works closely with the mines every day and understands their challenges,” Dickey said. “We develop every single one of our products keeping two things in mind, first…that every miner has a family to go home to and provide for. The second is that every product our chemists create is inspired by a real-life problem that our team identified in conjunction with our customers.”

One example of a positive operations experiences was with a large U.S. coal mining operator that approached Quaker with a unique challenge, and one which could have a ripple effect across the industry.

“They explained to us the numerous hazards associated with conveyor systems underground and discussed the regulations requiring fire-resistant belts, fire-resistant hydraulic fluids, and other components within the conveyor system,” Dickey said. “To their surprise, grease was not one of the elements required to be fire-resistant by law, which was enough to create a fire. They wanted to have conveyor systems that were completely fire resistant, so they asked us to assist them in developing a product for this application.

“We were able to work jointly with them and successfully developed the first fire-resistant, biodegradable grease on the market.”

One of the developments that has come from Quaker’s safety segment has also come from customer feedback: FluidSafe hydraulic fluid additive. Created from its working partnership with Anglo Coal, the product can quickly and accurately detect high-pressure fluid injection tissue injuries on-site.

It was designed to help pinpoint the exact location of hydraulic fluid under the skin, assisting in limiting soft tissue dissection when surgery is required. It can also help those in incidents to stay away from the surgery table when it may be able to be triaged more simply. If surgery is needed, medical personnel will be more easily be able to pinpoint and repair, lessening trauma for the patient.

In addition to the personal safety aspects, FluidSafe can help mines to detect those, fitting, seal and other component leaks, especially if the affected component is so degenerated that both safety and part integrity have been compromised. Thus, it can also help to prevent the fluid injection injuries from ever happening in the first place.

FluidSafe, OB and FluidSafe WB has caught notable momentum with mines in Australia, where it was initially developed, but the company has plans to roll the product out globally over time. 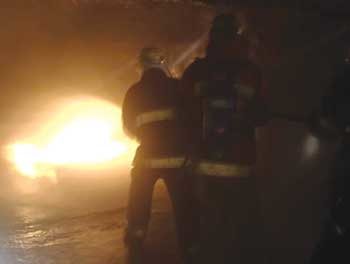