A small mine-equipment dealer in the Southwestern U.S. recently completed in-house fabrication of a custom-built drill truck, combining parts and assemblies from some of the world’s leading OEMs in a design that meets the extensive coal drilling requirements of a long-time customer, a large surface mine in the Four Corners area.

Golden Equipment Co. of Albuquerque, N.M., with about 60 employees and branch offices in Farmington, N.M., and Durango, Colo., isn’t the typical mega-dealership that generally wins orders from big operations such as BHP Billiton’s Navajo mine, located in northwestern New Mexico and with annual production exceeding 8.5 million tons per year (tpy), one of the top 20 largest surface coal mines in the U.S. Founded by a former Ingersoll-Rand sales rep in 1985 after I-R decided to close its local outlet, Golden Equipment now sells Volvo, Atlas Copco, Cedarapids, and other lines of equipment to local and regional mining and construction customers.

For Golden Equipment, the new drill truck is an encore to a similar project completed in the mid-1990s for the Navajo mine. Mike Bahrmann, vice president of operations, said the first order came by way of a unique set of circumstances. “We were a drill dealer and a Volvo ‘artic’ dealer, and the owner, Bill Golden, was an engineer by profession. He worked with the Navajo mine to identify some issues the mine had with coal drilling—such as the most effective way of getting drills up on top of the coal and moving them around efficiently—and then developed a proposal for the first drill truck,” which was completed and delivered to the mine in 1994.

That truck—which is still in service—and the latest version share the same general design elements: an extended Volvo articulated truck frame, with powerpack/drilling components from a rotary drill rig. The original truck will be overhauled by Golden Equipment and returned to the mine after the new truck is commissioned.

According to Bahrmann, Golden Equipment and BHP began discussing the possibility of building a new drill truck more than a year ago, and once the mine’s budgetary pieces fell into place in 2008, the two parties agreed on a six-month project term. The new truck was completed on time and was delivered to the mine in late June for a month of testing and break-in before being put into production.

The new version comprises a Volvo A25E 6×6 articulated haul truck chassis, stretched at the factory to include a 5-ft-longer wheelbase than standard, along with a 5-ft extension to the afterframe. Volvo also installed a cab large enough to include a reversible operator’s seat with dual controls mounted front and back, allowing the operator to control the drill from inside the cab and to drive the truck while facing in either direction.

The drilling powerpack is from an Atlas Copco DML rotary drill rig, and the twin mast assemblies are Atlas Copco units normally used for water-well drilling. This setup allows the Navajo mine to drill two 5-1/2-in.-diameter blastholes at a time, 23-ft deep and spaced roughly 14-ft apart. The whole drilling process, according to Bahrmann, takes about 45 seconds once the drill is in position. The overall speed of the process allows the mine to drill about 850 coal blastholes per shift.

The extended truck frame and cab are factory options that allow the truck’s primary systems such as engine, drivetrain, and suspension to remain completely stock-standard. Golden Equipment fabricated the platform on which the drill equipment is mounted and all of the various accessory brackets and other components needed to complete the installation. Safety features such as catwalks, equipment cover latches, and other items were installed in accordance with the mine’s requirements. The truck will be equipped, by the mine, with a Leica Geosystems GPS location system to provide accurate drillhole placement.

Although the company doesn’t yet have any additional orders booked for this version of the drill truck, Bahrmann said that after building Navajo’s new unit, any future orders would be relatively easy to handle. “We have a good working relationship with Volvo, we share quite a number of common business practices and beliefs with them, and we seem to both be moving in the same direction. We could order the extended version of the truck chassis from Volvo tomorrow, take the drill package off this truck and install it on the new chassis, and it would be a completely straightforward process. For us, it is essentially a stock order.”

Bruce Stats, Golden Equipment’s general manager of product support and project manager for the drill truck, explained that the initial cost of the drill truck would be slightly higher than that of a crawler rig capable of the same level of drilling performance, but that difference would likely disappear over time as the truck version would normally require less undercarriage maintenance, while mast and powerpack maintenance requirements would be very similar for both.  The new version is equipped with an auto-lube system that handles many of the rig’s routine lubrication requirements.

The overwhelming advantage of the drill truck, according to Stats, is its ability to easily drive onto the exposed coal seam, set up quickly, and move around on the seam much more rapidly than a crawler drill. “The mine operators love the rig,” said Stats. “They can remain inside a large, comfortable air-conditioned cab, drive the rig up on the coal, and set up to drill without setting any outriggers. And when they’re done, they can drive from pit to pit at up to 28 miles an hour.” 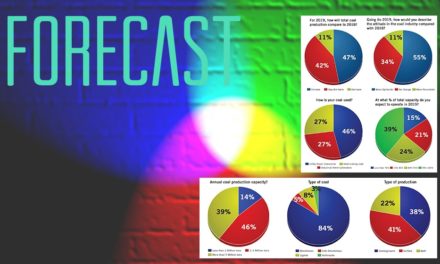