Large surface coal mines rely on primary crushers to provide a consistent product. Unlike their bituminous counterparts that screen and wash coal, the mines extracting subbituminous coal and lignite are only looking to reduce the size of Run of Mine (RoM) coal, and they are moving extremely high volumes. For them, screens are devices that are used in the sampling process.

These crushers have to be robust and dependable. If the primary crusher is down, the entire coal handling network is impacted. Thousands of tons per hour translates to tens of thousands of tons per day and hundreds of thousands of dollars. This is the mining business, however, and things happen. Spotting a front-end loader tooth in the bed of 240-ton haul truck before it dumps into a hopper is difficult, something akin to the proverbial needle in a haystack. The damage that metal could inflict on a machine reducing feed to minus 2 in. will be noticeable. 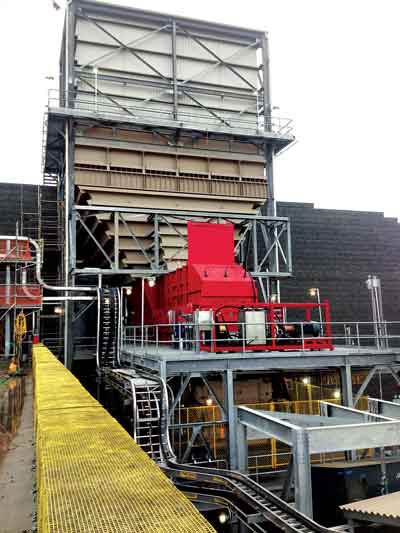 TerraSource 5100D 4-roll crusher with the Nitroil system on a RoM coal application.

To gain some perspective on the situation, Coal Age spoke to two leading crusher manufacturers. TerraSource Global has been crushing RoM coal in the PRB with its breakers since the late 1970s. MMD began marketing the sizer to the coal business in the late 1980s and operators have embraced the technology. The machines they installed for large surface applications are completely different. Yet, they achieve similar results.

HIGH-CAPACITY ROLL CRUSHERS
The large surface mines in the West scoop up the coal, then crush it and ship it. The crushers range from 2,000 tph to 6,000 tph, breaking 48-in. lumps down to 2- x 0-in. Mines these days want higher capacity and longer wear life, explained Phil Schaefer, TerraSource Global’s regional sales manager for the western U.S. and Canada. “Many of the TerraSource units originally installed in the PRB are still operating,” Schaefer said. “A few of the machines met their life expectancy and they have been replaced with new TerraSource units that will last another 30 years. More will need to be replaced soon.”

The standard-issue TerraSource unit for the PRB was the Gundlach 8000 series breaker with four 80-in. rolls that would crush 48-in. RoM coal to 95% passing 2- x 0-in. at 3,300 tph. It is being replaced by the 5000 series, designed to crush subbituminous coal to 95% passing 2- x 0-in. at 6,000 tph. “The biggest challenge with a crusher of this size is feeding it properly and then promptly removing the coal,” Schaefer said.

The technology has not changed that much. The basic principles of the roll crusher remain the same. What has changed is the configuration of the housing and its approach toward eliminating environmental impacts. The 8000 series — the first model in the PRB — was a carriage-mounted breaker with four rolls and two stages of crushing all in one machine, Schaefer explained. TerraSource redesigned these large crushers and they became known as the 5000 series crusher. “The componentry is pretty much the same,” Schaefer said. “It’s the way the housing is designed.” The housing has been improved to control fugitive dust.

Steel, or what the professionals refer to as “noncrushables,” is another area for concern on these high-capacity systems. “TerraSource uses the Nitroil system — nitrogen gas over oil — to protect its units,” Schaefer said. “The nitrogen is preset for normal coal-crushing applications. If a piece of noncrushable material passes through the system, it will overcome the preset pressure. The roll will move back and allow the noncrushable material to pass without damaging the crusher. It’s instantaneous. With the large 8-in. bore cylinders, the roll moves right back into the run position because it’s under pressure. The repeatability is very high.”

As far as general maintenance, the consumables on a roll crusher are the roll teeth, which make contact with the coal. “The teeth are replaceable, and they have gone through a series of changes over the years,” Schaefer said. “The original teeth were hard surfaced and then they moved to a carbide face, which increased the life.” 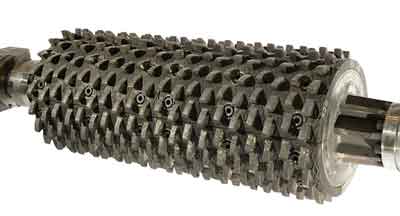 These crushers are large units and the rolls are heavy. Instead of removing the entire roll, they are segmented in such a way that maintenance crews unbolt a shell segment and bolt another one onto the roll. “Segments in the PRB are normally changed once a year,” Schaefer said. “These mines are moving higher tonnages than most coal mines. This maintenance work is scheduled downtime over a weekend, where the segments are shipped in advance and the crews are mobilized with the proper tools to do the job.”

Looking toward the future, Schaefer sees a lot of aging systems that will need to be replaced soon, not just in the U.S., but Canada, too. Those customers will likely want to incorporate more remote monitoring controls for these crushers into the mine’s central control system.

SIZERS OFFER AN EFFECTIVE ALTERNATIVE
For those that associate sizers with small capacities, David Pitchford, president, MMD Mineral Sizing for the Americas, has a reminder. If the conversation turns to overburden rather than coal, where capacities can run quite a bit higher, MMD has a fully mobile unit installed at the Pingshu coal mine in China that is processing 9,000 mtph.

For Pitchford, however, dependability is more important than size. He offers a primary sizer station in Colombia that handles 2,200 mtph as an example. At this mine, the MMD 625 series primary sizer sits below a hopper that integrates an MMD D4 apron feeder. “For that Colombian coal operation, we not only engineered the primary, but the entire system from the secondary sizers to the surge pile where they load the trains heading to the port,” Pitchford said.

The system in Colombia has a diamond-shaped hopper. “The angle is about 30° and it allows two trucks to dump at the same time into a 400-ton hopper,” Pitchford said. “The apron feeder redirects the RoM coal, which is reduced to 8 in. The conveyor goes to another tower with two additional secondary sizers before the coal in transferred to the reclaim pile. There are no screens in the network.”

On this particular application, MMD had to meet the challenge of reducing the coal to 98%, passing minus 2 in. on a round screen. “That is a fairly tight tolerance for a rather hard bituminous coal,” Pitchford said. “If the sizers are not meeting specifications, we hear about it. At first, we had some difficulties, because we usually work with a square screen and a 2-in. square piece of coal will not pass through a 2-in. round hole.” But MMD and the mine persevered, and the mine has subsequently purchased two more systems. They keep their performance data close to the vest for competitive purposes, Pitchford explained, “but they buy their wear components from us, and we are treated with respect when we are on-site.” 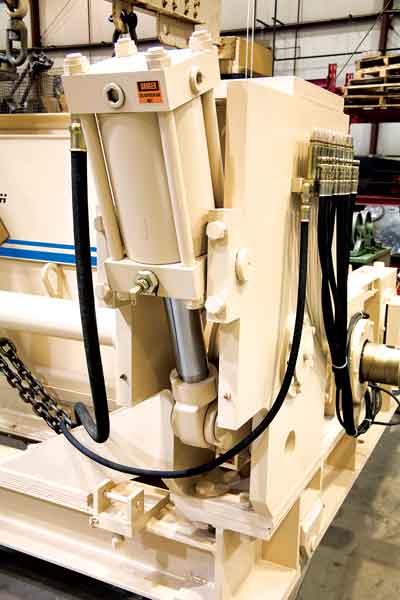 The MMD sizer works well with a hard bituminous coal and it also works well with a soft lignite. MMD has three very successful installations in North Dakota lignite mines for about 15 years now. “The selling point with lignite operators is the limited amount of fines generated by the sizing process,” Pitchford said. “The lignite from one of our customers is shipped to a gasification plant. The plant screens out anything that’s minus 0.25 in. and sends it back to the mine. It doesn’t want fines. The mine then blends that with another product stream for another customer.”

In this particular case, after passing the model 625 primary sizer, the lignite is transferred to a secondary sizer. A total of 1,800 tph is reduced to minus 3 in. “When we installed the first machines — the primary and secondary sizers — we reduced the amount of fines by 6% to 13%, depending on the feed,” Pitchford said. “They were saving money on re-handling coal. Two years later, they ordered four more machines.”

Those units have been operating since 1995 with no serious maintenance issues, Pitchford explained. “We have rebuilt them,” he said. “We have never had a shaft break or any serious gearbox problems. We provide the mine with spares. If a service engineer is needed, and they order replacement parts from us; MMD does not charge for the service call.”

How does a sizer react when it is faced with noncrushable material? The MMD machines have a fluid coupler between the motor and the shafts on the machine. The system is designed to withstand a 5-second stall before it shuts down the motor. The technicians reverse the machine to remove the tramp metal. “Nine times out of 10, the steel will pop up and the coal drains down the sides of the machine,” Pitchford said. “A good operator can free the tramp metal in 5 to 7 minutes; an unskilled operator will need about 45 minutes.” That same piece steel, Pitchford said, can do serious damage to other types of machines, taking them offline for a day or more.

MMD has earned its keep in Colombia and North Dakota and now several PRB operators are considering these systems, but money is tight at the moment. 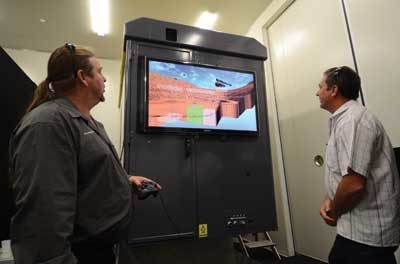 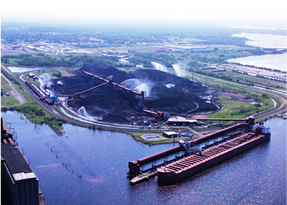