The changing weather and increased activity at many of the nation’s coal mines that can so often be tied to a rise in fatal accidents has, at least so far, not been a continued trend in the spring and summer of 2016. Between April and June, there were a total of two coal mining deaths, both of them underground and both of them in the bituminous coalfields. The victims also had multiple years of mining experience.

On May 16, following a quiet April, a powered haulage incident took the life of 50-year-old Eric Meddings, a motorman at Arch Coal’s ACI Tygart Valley Leer mine in Taylor County, West Virginia. The 14-year mining veteran was working as a lead motorman transporting empty supply cars to the slope bottom along with the tail motorman.

According to the Mine Safety and Health Administration (MSHA), while switching the cars through a set of airlock doors, the tail motorman heard the lead motor go through a closed airlock door.

“When he got to the lead motor, he found the victim unresponsive and slumped over in the operator’s seat,” preliminary findings of the incident revealed. “The tail motorman immediately phoned for help and started CPR within 5 minutes of finding the victim.” Meddings was pronounced dead at an area hospital.

The death was not initially listed as a mining-related death; officials with the state Officer of Miner’s Health, Safety and Training were among those investigating the event who initially felt the victim suffered a medically related issue. In late June, it was revealed that Meddings died of injuries sustained in the incident.

“The damage of going through the [airlock] doors resulted in the blunt force trauma that killed the front motorman,” MSHA said.

At press time, a fatalgram report with more information and best practices for prevention had not been released, nor had the agency’s final investigative findings been published.

The afternoon of June 6 in Illinois, 34-year-old contract laborer Robbie Clark was killed in a machinery accident at the American Coal Co. New Era operation in Galatia, Saline County. At press time, it was also the most recent coal mining-related fatality.

Clark, who had seven years of mining experience, had a little more than five weeks in as a laborer, but accident details showed he had only worked at the Murray Energy-owned (as a contractor for David Stanley Consultants).

MSHA’s preliminary report said the victim, who was moving gravel, was killed after the diesel front-end loader he had been operating fell on him.

“For some reason, he lowered the bucket and put downward hydraulic pressure on the bucket to raise the middle of the loader up,” agency investigators said.

“The victim and another miner, a company mine manager, crawled under the loader to check something, possibly a hydraulic [fluid] fuel leak. The hydraulic pressure released, allowing the loader to lower onto and trap the two men under it.”

According to the report, it was a pre-shift examiner who heard a call for help while passing by; that individual found the pair beneath the loader and placed pressure on the bucket again to raise the machine off of them. Clark was unresponsive after being freed, and CPR efforts were not successful.

A fatalgram report released shortly after the incident largely repeated the preliminary information as to cause, and stressed that miners not work under suspended load as part of a group of best practices for prevention of similar events in the future.

“Never depend on hydraulics to support a load,” MSHA officials said. “Use the manufacturer’s recommendations to lift and block equipment against hazardous motion before [capitalized for emphasis] starting any repairs.”

The agency also urged workers to never proceed with repairs until all safety concerns have been adequately resolved, and to conduct examinations from safe location and verify release of or full control of all stored energy before beginning repair work.

MSHA also has asked miners, in addition to ensuring proper safety training and establishing and discussing safe work procedures, to always treat suspended loads as unblocked until blocks or jack stands have been placed and full support has been verified.

At press time, a final federal investigation report was still pending on this incident.

In the alert, investigators said the victim received fatal injuries when an overhanging section of a rock rib fell, pinning him against the mine’s haulage equipment. The fallen rib was measured at 44 feet long, 4 ft wide and 2 ft thick. Frazier, as MSHA also reported in its preliminary findings, had been remotely operating a continuous miner (CM) to excavate material during the construction of a coal transfer shaft when the fall occurred.

The area where the accident occurred had a depth of cover of approximately 1,950 ft and a height of approximately 17 ft. Frazier had worked at the Harlan County mine for more than 14 years and had seven years of experience as a CM operator.

MSHA has not released its final report on the death, the fourth recorded in 2016. 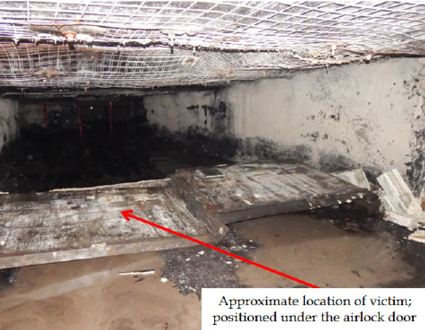 The scene of an accident at Dana Mining’s No. 4 West operation in Pennsylvania that resulted in the death of one miner in January.

On June 3, MSHA released its one and only coal mining fatality-related final report to detail the conditions leading up to the death of Jeremy Neice, 31, at Dana Mining’s No. 4 West mine in Greene County, Pennsylvania, on January 16.

The fatality at the mine owned by GenPower Holdings was the second of the year and was classified by the agency as a Fall of Face, Rib, Pillar or Highwall.

The report indicated that, during the early evening shift, Neice had mined about 18 ft out of “Run A” when another worker who witnessed the incident positioned his ram car behind the continuous mining machine to receive a load of coal.

“As Neice loaded the ram car, Keller heard a loud ‘bang,’” MSHA investigators said of the witness report. “He observed the rib rolling away from the coal block, striking Neice from behind, and pinning him to the mine floor. Keller stated that Neice was standing along the right side rib, approximately 5 ft inby crosscut 21 when the accident occurred.”

It took several workers to free the victim from the fall; a faint pulse was detected at that time and he was transported about 9,000 ft to the mine’s Marshall Portal. CPR efforts were made, but he was pronounced deceased at a local medical center.

“[The] operator received fatal crushing injuries when the mine rib rolled away from the coal block and pinned him to the mine floor,” officials said. “Deteriorating conditions existed prior to the accident indicating rib support was needed to protect miners from hazards relating to falls of mine ribs.”

In its corrective actions, the agency ordered the operator to revise its approved roof control plan to identify remnant pillar areas in the underlying mine that could contribute to poor rib conditions. That revised plan also requires rib support to be installed in-cycle in these areas inby the last open crosscut.

Additionally, the mine corrected hazardous mining conditions and examiners were retrained to properly evaluate and identify them as well as how to remedy any future issues.

Two 104(d)(2) significant and substantial (S&S) orders were issued to the No. 4 West operation as a result of the incident; the first cited a violation of 30 CFR Section 75.360(b)(11)(i) for a failure to identify adverse rib conditions.

“These conditions were obvious and extensive. This is an unwarrantable failure to comply with a mandatory standard,” MSHA said.

One worker was killed in an underground powered haulage incident at the Leer mine on May 16.

It was certainly a period no one wants to repeat. Just days after the start of 2006, on January 2 at 6:30 a.m., an explosion at the Sago operation in West Virginia rocked the mountain town of Tallmansville and the 29 workers who were underground at the time. While 16 were able to escape, 12 did not. Another one was left with serious, permanent injuries.

With so many lives lost, one couldn’t imagine things getting worse — but they did. Just weeks later, on January 19, two miners were killed in an underground fire at the Aracoma mine, also in southern West Virginia. It was one of many things that would go on to plague then-owner and now-defunct operator Massey Energy.

On May 20, another five miners died after a second mine explosion, this time at the Darby operation in Kentucky. Between the Sago and Darby incidents, a period of a little more than four months, a total of 31 coal miners were killed on the job. A staggering total of 47 coal workers nationwide died over the course of 2006. 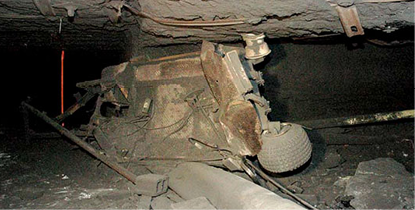 A mine explosion at the Darby operation in Kentucky in 2006 killed five. In all, 47 coal miners died that year.

While some in the industry have historically been critical of MSHA for having a “knee-jerk” reaction to such significant circumstances, the agency’s response to this set of incidents — the Mine Improvement and New Emergency Response Act of 2006, or MINER Act — brought with it many changes that have altered the face of mining as we know it, one of the most important of them being the implementation of advanced miner communication and tracking systems that are now commonplace where there were nearly absent just a decade ago.

The MINER Act, developed after those 19 combined deaths by a bipartisan Congressional group, became the first set of revisions to federal mine safety regulations since 1977 (and the most notable new laws enacted in three decades). They also forced the coal mining industry, for better or worse, to conduct underground operations in a significantly different way.

“The act required the industry to have a cadre of better trained mine rescue teams ready to rescue coal miners when needed. Miners trapped in a disaster now have chambers in which to take refuge, directional lifelines to guide them out, and increased caches of emergency air to keep them alive while emergency response teams put mandated mine emergency plans into action to locate and rescue them. In cases of mine accidents with multiple fatalities, the MINER Act established the role of a family liaison as a communications link to miners’ families while they await word about their loved ones.”

While it doesn’t seem possible that 10 years have passed since that unfortunate group of fatalities occurred, there is no denying that the regulations they helped shape within the MINER Act helps ensure that their deaths were not in vain.

Also, MSHA continued its momentum by making several other changes in the years that followed, including upgrading its own mine emergency mobile command centers and response equipment and adding upgraded skills training for mine rescue teams across the U.S. Likely the result of issues encountered during the Sago mine incident, the agency has also expanded its family liaison program to include support for loved ones following any mining death, not just those that grab national headlines.

“Since the MINER Act’s passage 10 years ago, the mining industry has seen profound changes,” Main said in June as he marked the anniversary of the regulations. “In fact, 2015 marked the safest year in mining history with the fewest number of mining deaths and the lowest fatality and injury rates ever recorded.

“Our work, however, continues. We remain focused on doing whatever we must to return miners to their loved ones — safe and healthy — after every shift.”

The Sago mine explosion grabbed national headlines in January 2006. The blast killed 12 and left one miner with serious injuries. 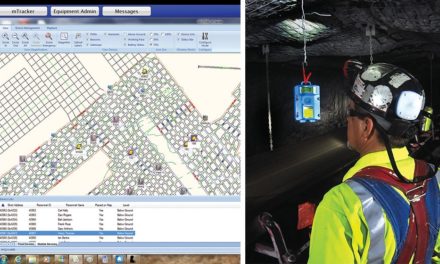 New Wireless Tech for Underground Mines Could Save Lives, Costs