The Secret We All Know

Early in his presidency he began by taking potshots at us — here vetoing a mining permit, there cooking up new water quality “standards” to protect big flies that reproduce in West Virginia ponds. When bugs are more important than coal miners, it’s time to write your congressman. Back then, the president’s men were still talking about supporting “clean coal” and the “all-of-the-above” energy portfolio that his Natural Resource Defence Council (NRDC) appointees were reluctantly supporting. It was too soon in his presidency to start making enemies.

Later, impatient with this piecemeal approach, this death by a thousand cuts, the White House reached for heavier weapons against coal, taking the leash off the Environmental Protection Agency (EPA) and its NRDC handlers and sticking coal power plants with a mercury and air toxics rule that will end up shutting down about 20% of the coal fleet. Lord Nelson didn’t have that much success at Trafalgar. The damage wasn’t from the mercury standard itself, but from the air toxics limits that were hastily added to the rule in the 12th hour, despite the absence of any discernable benefit from them.

The mercury rule was followed by the New Source Performance Standards for power plants. Recall these were technology standards for new construction that set CO2 emissions so low for coal combustion they ruled out the use of any low-emissions technology, but carefully protected combined cycle gas. By this time, the White House had dropped any mention of coal from the comprehensive list of energy sources it pledged to support. With new coal plants out of the way, it remained to destroy existing ones remaining from the mercury rule. Meet the Clean Power Plan (CPP), the president’s gift to the global environmental industry gathering at the United Nations Climate Conference in Paris. With the connivance of the states, the administration hopes the CPP will finish off what the mercury rule started.

By this time, the administration’s “war on coal” was bigger than its war on terror — and arguably more effective. Coal has been stopped in its tracks while global terrorism metastasizes. Of course, the casualties in the “war on coal” are the good guys. These are the thousands of miners and their families, and the tens of thousands of others who rely on coal, all victims of “friendly fire” from their own government. At the United Nations Climate Conference, the president boasted of his plans to shut down his coal industry, but here at home attributes the coal carnage to fuel switching from gas. This president may have a climate change legacy, but he’ll certainly be recalled for having destroyed more blue-collar, high-wage employment opportunities than any president in history.

He’s not done yet. So far, the fight against coal communities has largely been carried out by the EPA. No longer. Not to be outdone by its sister agency, the Department of the Interior (DOI) has now joined the coal killing frenzy. First, it released the Office of Surface Mining’s Stream Protection Rule, a 2,200-page behemoth that would keep more than 60% of the nation’s coal reserves in the ground and, according to one study, more than 100,000 unemployed. Then came DOI’s attack on the federal coal leasing program with the announcement of a three-year moratorium on coal leases (spoiler alert: read “permanent” moratorium).

With this latest anti-coal gambit, the White House no longer pretends to conceal its ambition. The president used his State of the Union message to boldly announce his intention to smother the federal coal program under contrived new restrictions. No matter that the DOI’s own reports show PRB mining operations are free of off-site environmental impacts and deliver to taxpayers — in royalties, bonus bids and taxes — 39 cents of every dollar earned. So accepted is this two-front assault on coal that few even blinked when the administration quietly withdrew its support for FutureGen 2.0, the carbon capture demonstration plant in the president’s home state. Instead of showing the world how technological innovation can make affordable fossil energy cleaner and its jobs safer, the president chose to show how he can test the limits of executive authority to eliminate both coal and coal miners.

With less than a year left to his presidency, the gloves are off, the mask has fallen.

Luke Popovich is a spokesperson for the National Mining Association, the industry’s trade group based in Washington, D.C.

Change We Can Believe In 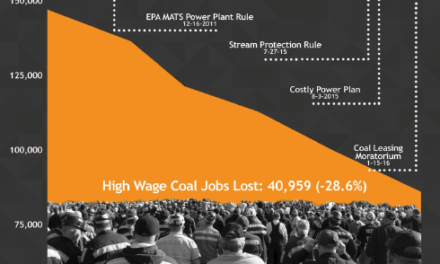 The Coalfields and the Candidates