XPRIZE Awards 2 With $7.5M Prize for Creating Valuable Products Out of CO2 Emissions 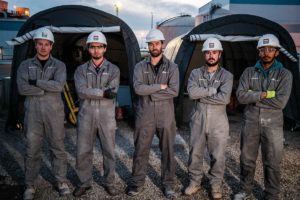 CarbonCure Technologies and CarbonBuilt have won the $20 million NRG COSIA Carbon XPRIZE, a prize that set out to convert CO2 emissions into valuable products.

Selected by a panel of independent judges, both winning teams developed solutions aimed at reducing CO2 emissions associated with traditional concrete, which is currently the world’s most abundant human-made material and accounts for 70% of all global CO2 emissions.

Launched in 2015, the NRG COSIA Carbon XPRIZE was a five-year global competition developed to address rising CO2 emissions by challenging innovators around the world to develop breakthrough technologies that convert the most CO2 into products with the highest net value.

“The NRG COSIA Carbon XPRIZE, its two winners, and the eight other finalists have developed breakthrough technologies that allow humanity to reimagine what is possible for the climate change fight,” XPRIZE CEO Anousheh Ansari said. “Thanks to the vision laid out and supported by NRG, COSIA and many other partners, flipping CO2 emissions into valuable products is now a proven, successful strategy to build a better world.”

The competition included two tracks: the Wyoming track that focused on the conversion of emissions from a nearby coal-fired power plant, the Wyoming Integrated Test Center in Gillette, Wyoming, and the Alberta track that used emissions from an adjacent natural gas-fired plant, the Alberta Carbon Conversion Technology Centre in Calgary, Alberta. The winning teams, one from each track, converted the most CO2 into products with the highest value, while minimizing their overall CO2 footprint, land use, water use and energy use.

CarbonCure Technologies, the Alberta track winner from Canada, demonstrated a technology that enabled the production of concrete with a reduced water and carbon footprint without sacrifice to the material’s reliability. Utilizing CarbonCure Technologies’ system, a dosage of CO2 is injected into a concrete plant’s reclaimer system, which contains the water used to wash out concrete trucks and mixers. The CO2 is converted into a permanently embedded mineral with strength-enhancing properties, which can then be incorporated into new concrete mixes. By reducing the amount of new freshwater, solid waste disposal and cement required, the team, backed by Bill Gates’ fund Breakthrough Energy Ventures, Amazon Climate Pledge Fund, BDC Capital and others, is able to reduce the material costs and increase profitability for concrete producers.

“I’m incredibly proud of Team CarbonCure’s hard work, dedication, and ingenuity that contributed to our win,” said Jennifer Wagner, president of CarbonCure and team lead for the competition. “The prize winnings will accelerate our path to achieve our company mission of reducing 500 megatonnes of CO2 emissions annually by 2030. Technology alone will not get us to our net-zero emissions targets — concrete producers, the wider construction community, and policymakers are important allies on our journey to decarbonize the concrete industry.”

The Los Angeles-based Wyoming track winner, UCLA CarbonBuilt, developed technology that reduces the carbon footprint of concrete by more than 50% while reducing raw material costs and increasing profitability. The CarbonBuilt concrete formulation significantly decreases the need for ordinary Portland cement while enabling the increased use of low-cost waste materials. During the curing process, CO2 is directly injected from flue gas streams (like power plants or cement factories) into the concrete mixture where it is chemically transformed and permanently stored. Development began at the UCLA Samueli School of Engineering in 2014 with support from the NRG COSIA CARBON XPRIZE, philanthropic foundations, private and corporate sponsors, as well as government agencies including the U.S. Department of Energy.

“I am absolutely thrilled that UCLA CarbonBuilt has won the NRG COSIA Carbon XPRIZE,” said Gaurav N. Sant, professor of civil and environmental engineering and of materials science and engineering at UCLA Samueli. “As a third-generation civil engineer, I have been fascinated with the role that construction has played in solving societal challenges. To have spent the last decade finding a solution to mitigate the carbon footprint of concrete construction with a phenomenal team, and to have won the NRG COSIA Carbon XPRIZE, doing so is an ultimate dream come true.” Sant is also the director of the UCLA Institute for Carbon Management and founder of CarbonBuilt Inc., a private company set up to commercialize the pioneering CO2 utilization technology.

Marcius Extavour, vice president of climate and energy at XPRIZE, said concrete can be readily made using CO2 and an input, “which the winning teams have demonstrated really clearly.”

Each grand prize winner will be awarded a $7.5 million prize purse and will receive their winnings within 60 days. Those interested in learning more can do so at carbon.xprize.org