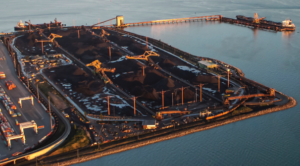 Canada’s Westshore Terminals reached an agreement with Local 502 of the International Longshore and Warehouse Union (ILWU) on Oct 10, 2022. The new six-year agreement expires on January 31, 2028, and is subject to a ratification vote by the end of October 2022. Work has resumed at the terminal. The company said the negotiations with Local 502 were the first of three locals and talks with the other two ILWU Locals (514 and 517) will be scheduled in the near future.

Westshore estimated its annual throughput volume for 2022 at 24-25 million metric tons (mt) of coal, a reduction from the previous estimate of 27.5 million mt of coal. The reduction reflects the impacts of the labor disruption as well as a less-than-expected performance from BNSF, the rail carrier for the port’s US customers, for the second half of the year. The estimated throughput volume assumes no further work stoppages or other disruptions to regular business operations. The anticipated average loading rate for 2022 is slightly above $12/mt.

Located at Roberts Bank near Delta, British Columbia, Westshore typically loads 33 million mt/y of coal from mines in British Columbia, Montana and Wyoming. The terminal is currently adding capacity to handle potash, which is mined in Saskatchewan. The construction phase of the project will take approximately four years and Westshore expects to start shipping potash in 2026.