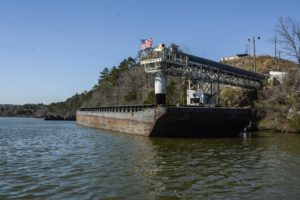 Warrior Met Coal Inc. plans to invest $50 million to construct a barge load-out facility in Walker County, Alabama, to support its expanding metallurgical coal mine near Tuscaloosa. The project is expected to add 12 new jobs.

The barge load-out facility will become integral to transporting the company’s coal production, according to David Knight, executive director of the Walker County Development Authority. The coal will be transported by barge to the Port of Mobile’s McDuffie Coal Terminal for export.

Warrior Met announced plans in February to construct the Blue Creek development, which will be a single longwall mine and is expected to have the capacity to produce an average of 4.3 million short tons per year of met coal over the first 10 years of production. First development tons from continuous miner units is expected to occur in the third quarter of 2023 with the longwall scheduled to start up in the second quarter of 2025.

This new mining operation involves a total investment of $578 million and will create 371 jobs.

“Warrior Met Coal’s growth plans will provide a significant injection of economic vitality into Alabama’s coal country, and the high-paying jobs being created by the company will benefit many families and communities in this region,” Secretary of the Alabama Department of Commerce Greg Canfield said.

US Supreme Court Will Review EPA’s Authority Over GHG Emissions