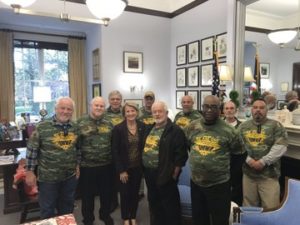 Member of the United Mine Workers of America meet with a sponsor of the bipartisan bill, Sen. Shelley Moore Capito. Credit: UMWA

U.S. Senate Majority Leader Mitch McConnell (R-KY) and Sens. Shelley Moore Capito (R-WV) and Joe Manchin (D-WV) introduced the Bipartisan American Miners Act of 2019 on November 6, which will protect health care and pension benefits for thousands of retired miners and their families. It will shore up the 1974 Pension Plan, which is headed for insolvency, and ensure that the miners who are at risk due to 2018 and 2019 coal company bankruptcies will not lose their health care, according to the senators.

The Bipartisan American Miners Act of 2019 will amend the Surface Mining Control and Reclamation Act of 1977 to transfer funds in excess of the amounts needed to meet existing obligations under the Abandoned Mine Land (AML) fund to the 1974 Pension Plan. The bipartisan bill also expands the existing health care benefits provided under Sen. McConnell’s HELP for Coal Miners Health Care Act of 2017 to the orphaned coal miners whose benefits have been put in jeopardy. These actions will secure the pensions of 92,000 coal miners and protect health care benefits for 13,000 miners.

“Since his election, President Trump and I have worked together to end President Obama’s ‘war on coal’ that has hurt thousands of Kentucky families,” McConnell said. “Unfortunately, eight years of regulatory assault on coal country can’t be undone overnight. The startling number of orphaned miners in the drastically underfunded pension plan presents an urgent crisis for entire communities of miners, retirees, and their families.”

“Our coal miners made a commitment to our country, and now it is our turn to uphold the commitment we made to them in 1946 by securing their hard-earned pensions and health care,” Sen. Manchin said. “This is not a solution that can be held off any longer and we must act now.”

“For the thousands of West Virginia miners depending on these pensions and health care plans, this bipartisan fix is the answer,” Senator Capito said. “This is a permanent remedy for the pension and health care dilemma miners across Appalachia have unfairly had to face.”

United Mine Workers of America (UMWA) President Cecil E. Roberts, applauded the introduction of the bill, saying, “With this one bill, the United States Senate has taken a giant, bipartisan step forward in keeping America’s promise to our coal miners and their families.”

He added that this legislation would provide “some peace of mind to these retired American heroes.”