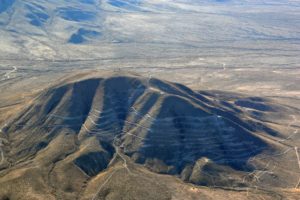 TMRC, which is developing its Round Top (above) heavy rare earth critical minerals project, will partner with Jeddo Coal Co. to install a pilot plant at a site in Pennsylvania capable of producing 1 to 3 metric tons fo rare earth oxides from coal byproducts. (Photo: TMRC)

Texas Mineral Resources Corp. (TMRC), along with its funding and development partner USA Rare Earth LLC, were awarded a grant from the U.S. Department of Energy (DOE)’s National Energy Technical Laboratory for the production of rare earths from Pennsylvania coal byproducts.

The project will commence on October 1, with a three-month conceptual design phase and an ultimate objective of completing a design package (feasibility study) to prove the technical and economic feasibility for a facility capable of 1-3 metric tons per day (mtpd) production of mixed rare earth oxides.

“We believe that the technological strength and experience of our team goes a long way toward a positive result from this project,” TMRC Chairman Anthony Marchese said. “This grant is a significant step forward toward creating the first of these operations in the Pennsylvania region.”

He added that the potential “to profitably produce scandium and other rare earth minerals from Pennsylvania anthracite coal byproducts hold great promise.”

Marchese said the consortium is committed to working with local companies, capital sources and public officials in order to create a meaningful economic opportunity.

“We see great opportunity ahead for the university, commonwealth and nation to establish a domestic supply of rare earth and other critical elements while creating jobs and remediating associated environmental problems while producing strategically important materials for high-tech and defense applications,” said Lee Kump, John Leone dean in the College of Earth and Mineral Sciences.

Successful completion of the DOE grant is consistent with a commercial supply chain in which final separation of the mixed REE concentrate into individual high purity rare earth oxides would be accomplished at USA Rare Earth’s processing facility using CIX/CIC processing methodology.