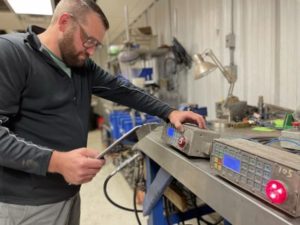 Swanson Industries, a leading provider of hydraulic cylinder manufacturing, remanufacturing, repair, and distribution services, is pleased to announce that it has acquired the majority ownership of Tiefenbach North America, LLC (TNA). The acquisition was completed on October 31, 2022. Tiefenbach Control Systems, Gmbh (TCS) will retain a minority interest in TNA.

Established in 2000, Tiefenbach North America, headquartered in Morgantown, W.Va., is a leading supplier of hose, fittings, and hydraulic components for longwall systems for mining customers.

“The suite of Tiefenbach products helps to round out Swanson’s product offerings to the marketplace and leaps forward in offering a complete control package to our longwall customers specifically,” said Steve Sangalli, CEO of Swanson Industries.

TNA Managing Director Chris Dulin will join Swanson as its vice president of mining. “The combination of resources and synergies allows both companies to become stronger by broadening our product portfolios and strengthening our support networks for our mining customers,” Dulin said.

TNA was founded in 2000 and began as a supplier of hydraulic controls for longwall roof supports to underground mining customers in North America. The company’s foundation was built with products that were engineered and manufactured by TCS. In the year 2007, the company began producing hydraulic hose assemblies to complement the longwall roof support controls. This product offering was then expanded in 2010 to other types of mining equipment and machinery. Since then, the company has continued to add additional high-quality hydraulic products and services to the mining industry, while expanding into other markets such as oil/gas, industrial, and OEMs.

McNamee Moves on to Senate Vote