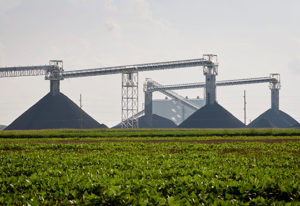 “ARLP’s performance during the 2021 quarter was exceptional as we posted increases to key financial and operating metrics,” Chairman, President and CEO Joseph W. Craft III said. “Coal sales volumes increased 1 million tons as weather-impacted shipment delays in the sequential quarter were shipped during the 2021 quarter and we significantly strengthened our contract book by securing new commitments to deliver approximately 5 million tons over the balance of this year and an additional 3.7 million tons for delivery in 2022 through 2024.”

ARLP’s coal sales volumes increased in all regions compared to both the 2020 and sequential quarters. Improved coal demand and increased export shipments during the 2021 quarter drove coal sales volumes higher by 61.9% and 31.9% in the Illinois Basin and Appalachian regions, respectively, compared to the 2020 quarter, which was adversely impacted by the pandemic, according to the company.

“Commodity prices for each of our business segments have skyrocketed to levels not experienced in several years,” Craft said. “Looking ahead, coal market fundamentals are extremely strong both domestically and internationally.

In the primary U.S. markets, coal-fired generation surged in response to a 7.5% year-over-year increase in power demand through the first half of 2021 and soaring natural gas prices, according to Craft. “As utilities have leaned heavily on coal generation, stockpiles in our markets have been significantly drawn down and, with an elevated forward price curve for natural gas, coal demand is expected to be stable through 2022,” he added.

“As a result, we are increasing the midpoint of our targeted total coal sales volumes for 2021 by approximately 6% to 32.9 million tons,” he added.

Drilling and completion activity is also greater than previously anticipated, leading the company to increase 2021 full-year production volume expectations. In addition, increased sales volumes at ARLP’s coal mines are expected to benefit the coal royalties segment. “With expectations of increased oil, gas and coal production and strong commodity pricing, we believe the contribution of our royalty segments to ARLP’s consolidated results will continue to grow,” Craft said.