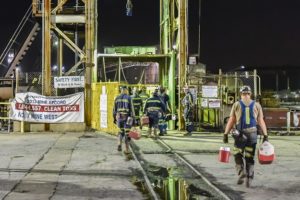 In recent weeks, the seven-monthlong strike at Warrior Met Coal Inc. has escalated, according to the company. The amount and severity of alleged “criminal” behavior has increased. Members of the United Mine Workers of America (UMWA) have interfered with the entrance and exit at the company’s facilities, attacked personal vehicles, property and people, according to Warrior Met Coal.

“Warrior Met Coal Inc. respects the right of represented employees to engage in lawful strike activities and has provided the UMWA picketers with reasonable spaces to picket at our entrances since the strike began on April 1, 2021. However, while the UMWA has portrayed their actions as ‘peaceful protests’, in recent weeks striking workers have escalated.”

The UMWA represents about 850 workers at this company.

The company, which operates two mines, a prep plant and central shop, released video of the increased violence, which showed car windows being smashed and picketers blocking entrances to the facility. (Watch the video here.)

The company said the picketers’ behavior is in violation of both Alabama’s workers’ rights and the injunction granted by a Judge James Roberts in Tuscaloosa County on April 28.

“While unacceptable behavior by the picketers has been occurring since the strike began, actions both on the picket line and in the community have reached a dangerous level over the last week,” the company said.

According to the company, employees have allegedly been attacked in their vehicles, physically intimidated, and assaulted, and had personal vehicles and homes vandalized. Also, the company’s transport buses are being escorted by law enforcement vehicles and continue to be threatened and attacked by UMWA picketers.

Employees’ homes and vehicles have been shot at from passing cars, and jack rocks and spike strips have been placed on area roads to damage their vehicle tires, the company also alleged.

Warrior Met Coal asked for the UMWA to change its practices, strongly denounce this behavior and take action to stop this violent, unlawful conduct in order to maintain public safety.

On the UMWA side, they have also spoken out about the increased violence, but against picketers. They alleged that there have been six different instances when picketers were struck by vehicles.

The UMWA claims that workers sacrificed wages, time off from work, and loss in overtime pay and full healthcare coverage when the company filed for bankruptcy back in 2016. “What Warrior Met has offered is just a tiny fraction of what the workers gave up five years ago,” UMWA President Cecil Roberts said. “These workers are tired of being mistreated, they are tired of being forced to work and missing time with their families. Warrior Met knows it is exploiting these workers, and it’s time for it to stop.”

The company believes it has been working in “good faith” to come to an agreement. However, one has yet to be reached. The company said the proposed contract from April offered extra pay that equated to a 10%-12% raise. “We want to provide our employees with a highly attractive compensation and benefits package and to secure the company going forward so Warrior Met Coal can remain in operation no matter the market conditions,” the company said.