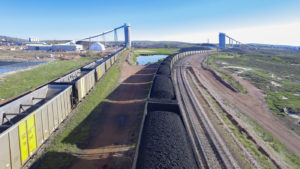 Electricity demand this year has increased 3% year-to-date over last year and coal’s share of the electricity generation mix has increased to about 23%. As a result, stockpiles of thermal coal in the U.S. are 30% lower than this time last year, which would be the lowest levels since 1997.

The combination of limited production capacity and increased demand has pushed spot prices for coal dramatically higher. The Energy Information Administration (EIA) reported this week that spot prices for Powder River Basin (PRB) coal more than doubled, jumping $16.30 per ton to $30.70/ton. Central Appalachian coal prices climbed $10.70/ton to $89.75/ton. Spot prices for Northern Appalachia, Illinois and Uinta Basin coals were also up across the board by $2/ton to almost $5/ton. [Editor’s note: These prices are for FoB tons delivered in the first quarter of 2022.]

Commenting on the situation for thermal coal in the U.S. during the company’s recent third-quarter conference call, Peabody Energy CEO Jim Grech said they have limited unsold thermal tons for 2022 at the 90-million-ton production level. “We are looking to improve upon those volumes,” Grech said. As far as thermal production in the Midwest, he said most of that coal is already sold for 2022 and 2023.

Peabody operates the North Antelope Rochelle mine in Wyoming, which was on pace to produce about 64 million tons at the end of the third quarter, according to statistics from the Mine Safety and Health Administration. It produced 66.1 million tons in 2020, which was down from 85.4 million in 2019.

Arch Resources, which operates two thermal coal mines in the West, the Black Thunder mine in Wyoming (PRB) and the West Elk mine in Colorado, also said it is effectively sold out for 2022 at record-high average pricing levels.