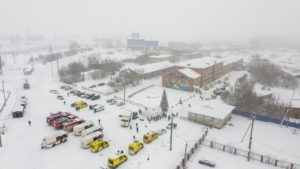 Ambulances and fire trucks park near the Listvyazhnaya coal mine out of the Siberian city of Kemerovo following a fire that left 52 dead. (Photo: Governor of Kemerovo Region Press Office)

With the death toll rising to 52, the Listvyazhnaya coal mine disaster is now considered the worst tragedy in the Russian mining industry in the past 11 years, since the explosion at the Raspadskaya coal mine in the Kemerovo region in May 2010, which claimed 91 lives.

The Listvyazhnaya coal mine, near the town of Belovo 3,600 kilometers (2,900 miles) east of Moscow, filled with smoke early November 25 with 285 people inside. Rescue services reported that 52 people died, including miners and six rescuers who had been part of an aborted search operation.

The cause of the accident is not fully known. An unnamed official from a Russian technical watchdog told Russia’s state news agency TASS that the mine’s methane sensor at Listvyazhnaya did not register an excess of the maximum permissible concentration.

Russian authorities have launched a criminal case against the mine director, his deputy, the foreman, and several Rostekhnadzor inspectors over suspected negligence and breach of safety procedures. The Central District Court in the city of Kemerovo put Sergei Makhrakov, Andrei Molostvov, and Sergei Gerasimyonok in jail during the investigation.

Another Russian state news outlet Ria Novosti reported that the fire broke out at the mine a week before the accident. Citing unnamed family members of the miners, the publication also said alarms on methane detectors that miners are required to wear were ignored.

During the past few years, Listvyazhnaya, operated by the Russian coal company SDS-Ugol, was inspected by multiple agencies for safety and fire violations, forced to shut down nine times, and fined more than $55,000. Andrey Vil, a spokesman for Rostekhnadzor, said the Russian regulator found more than 900 violations of technical regulations in the course of 127 inspections at the mine this year.

Ruben Badalov, first deputy chairman of the Russian Independent Trade Union of Coal Industry Workers, said the incident might expose systemic safety problems of the Russian coal industry. For example, he said, up to 70% of equipment at Russian coal mines might be worn off. This includes ventilation systems and lifting equipment, among other things.

Badalov added that the average monthly wage at Listvyazhnaya was 50,000 rubles ($630), which is clearly not enough, and might result in some critical work underground being performed by unexperienced employees.

The accident could push the Russian authorities to enhance safety requirements during mining operations in the country, Nikolay Shulginov, the Russian Energy Minister, said during a press conference on November 26, stressing that the final decision would depend on the results of the ongoing investigation of this accident.

“A revision of legislative requirements is always possible after such kind of tragedies” Shulginov said. “An investigation will be conducted to see whether there were any violations and whether these violations were associated with the incompliance with the safety requirements or that the very requirements must be enhanced.”