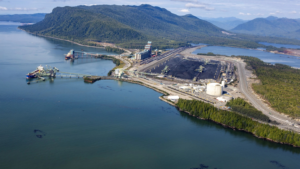 Coal exports from the Ridley Terminal in Prince Rupert, British Columbia, jumped to 1.16 million metric tons (mt) in May, according the Prince Rupert Port Authority. The combination of metallurgical and thermal coal was an increase of 52.5% from 761,104 mt in April. It was also just short of the highest level reported at 1.19 million mt, which occurred in March 2013. The increase for May 2020 was also 83.1% higher than May 2019, which saw 634,065 mt of exported coal.

The 4.5 million mt exported in the first five months of the year was up 36.4% from the same period in 2019 and was the highest level through May in more than nine years.

Year-to-date thermal exports were at 1.87 million mt, up 99.5% from a year ago and the most through the first five months in over nine years.

The terminal, the closest major North American coal export terminal to Asia, is served by the Canadian National railroad. In January, Ridley Terminals signed a seven-year deal with Teck Resources to increase its contracted capacity from 3 million mt to 6 million mt, starting in 2021, with an option for Teck to extend up to 9 million mt.