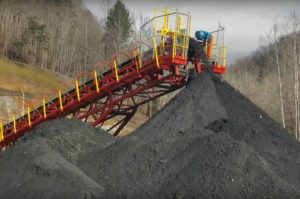 Reporting a quarterly production record of 577,000 tons of coal, Ramaco Resources increased its full-year 2021 production guidance and lowered its 2021 cash cost guidance. The company also said the Berwind slope development and Big Creek mine are now progressing both on time and on budget, which could bring the company’s production capacity up to more than 3 million tons per year (tpy) by mid-2022.

“We just had an exceptional quarter with our operating team hitting on all cylinders,” Chairman and CEO Randall Atkins said. “They did an outstanding job of safely producing a record 577,000 tons in the first quarter of 2021, which was well above our internal projections. This led to record low company-wide cash costs, which were sub $60 per ton.”

He added that the company is “probably the only non-longwall producer of met coal in Central Appalachia that can say it achieved sub $60 per ton cash costs in any recent quarter. This puts Ramaco clearly in the first quartile of the U.S. met coal cash mine cost curve, even including longwall producers.”

The company continues to progress toward its long-term goal of 4 million to 5 million tpy of low-cost metallurgical coal production, Atkins said.

“From a macro perspective, we are increasingly positive about both demand and pricing prospects for met coal over the next year,” Atkins said. “U.S. metallurgical coal indices are now already up well over 50% from this time last year, while steel prices in the U.S. are up over 200% and abroad are at all-time highs.

“As it relates to the domestic steel market, I would also note that inventories are near record lows, and capacity utilization is approaching pre-COVID-19 levels of just under 80%. Although met prices have lagged behind other steel related commodities so far this year, we expect an impending catch up in the months ahead as price begins to better track demand. We also have purposefully maintained a good deal of ‘dry powder’ of roughly 400,000 tons of unsold 2021 production that we expect to place in the second half of 2021 at higher prices than we are seeing today.”

Atkins said this positive market positioning is happening as the company enter into negotiations for the 2022 annual contracts with domestic steel mills this summer.