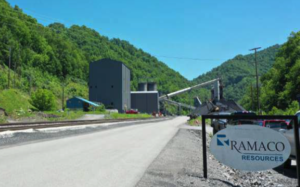 In its third-quarter earnings release, Ramaco Resources said its overall production for the quarter was 658,000 tons, up 19% from the same period of 2021. The Elk Creek complex produced 511,000 tons. Production from the Berwind and Knox Creek Mining complexes increased from 43,000 tons in the third quarter of 2021 to 147,000 tons this quarter. Overall total sales were 608,000 tons, down from 644,000 tons in the third quarter of 2021. The company attributed the decline to continued rail-related challenges.

“We have built 56,000 tons of inventory, largely based on continued logistical rail loading issues, bringing the year-to-date inventory build to 235,000 tons,” said Randall Atkins, chairman and CEO, Ramaco Resources. “We anticipate the bulk of this inventory buildup to unwind in 2023 as logistical challenges hopefully ease and the prep plant upgrade is completed at our Elk Creek complex.”

Overall Q3 production (658,000 tons) was down 8,000 tons compared with Q2 2022. This limited drop was despite the Berwind mine being closed for almost the entire third quarter due to the early July ignition event. Total sales volume of 608,000 tons was up modestly from the second quarter 2022 level of 584,000 tons.

“Despite current inflationary cost pressures, we continue to see a decline in key raw material costs such as the price of diesel fuel and steel for roof bolts,” Atkins said. “Our Elk Creek cash mine costs declined 7% to $93/ton versus the second quarter of 2022. As our Berwind and Knox Creek complexes ramp up production over the coming quarters, we anticipate that their costs will fall meaningfully from current levels.”

Third-quarter capital expenditures totaled $37.6 million. This was an increase of 10% versus $34.1 million for the second quarter of 2022. The increase was attributable to the continued development of two new mines and the prep plant renovation at the Berwind complex, and the ongoing plant expansion at the Elk Creek complex. Over 75% of the company’s year-to-date capital expenditures of $91.4 million relates to its ongoing growth projects.

Ramaco anticipates that the fourth quarter of 2022 will be the company’s strongest quarter on record in terms of both sales and earnings excluding Berwind idle costs, based on being fully sold out for full-year 2022 at an average price of $210/ton FOB mine.