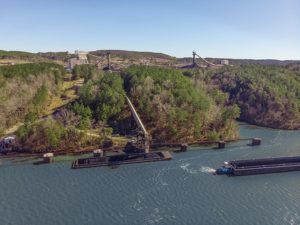 Peabody temporarily idles the Shoal Creek mine (above) in Alabama during October to reset the cost structure of the mine. (Photo: Peabody Energy)

Reacting to difficult market conditions and struggling with a loan agreement, Peabody Energy said it is driving structural change throughout its organization. In its recently released third-quarter earnings report, the world’s largest coal producer posted lower sales volumes and weakening prices, and said revenue dropped to $671 million from $1.11 billion. The company also said based on its current outlook, fourth-quarter results will be insufficient to “meet the minimum required net leverage ratio as defined under the revolving credit agreement” by December 31.

Peabody temporarily idled the Shoal Creek mine in Alabama during October to reset the cost structure of the mine. Production is expected to be suspended for the next several months. The company also scaled back production and the workforce at the Wambo Underground in New South Wales, Australia, including temporarily suspending production for 59 days during the third quarter. It idled an excavator fleet at the Moorvale mine in Queensland, Australia, in November citing elevated inventory levels and weak pricing.

NMA Joins Federal Agencies to Honor Achievements in Mine Safety