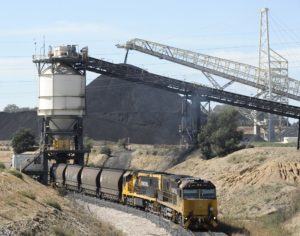 Peabody’s Wilpinjong mine has record railings in 2019. (Photo: Peabody)

These benefits will partly offset current lower prices, lower U.S. thermal volumes and the loss of $200 from the closing of the Kayenta and Millennium mines, Kellow said.

Peabody’s seaborne thermal segment exported 3.3 million tons at an average price of $64.83/ton, with the remainder delivered under a long-term domestic contract in the fourth quarter. For the full year, Peabody’s export thermal sales totaled 11.5 million tons with domestic shipments totaling 8 million tons. During the quarter, the Wambo complex had improved production, which contributed to strong segment cost performance of $30.68/ton and underpinned fourth-quarter seaborne thermal margins of 33%. In addition, the Wilpinjong mine had record railings in 2019. Peabody also formed the United Wambo joint venture (JV) following government approvals.

Fourth-quarter seaborne metallurgical coal sales totaled 1.9 million tons. Production improved significantly at the Coppabella and Moorvale mines, with the fourth quarter marking the highest quarterly production volumes for the year. As a result, the metallurgical segment delivered a 10% cost-per-ton improvement compared to the prior year, excluding North Goonyella costs, despite 17% lower year-over-year volumes. North Goonyella, a major met mine in Australia, was idled because of fire in the third quarter of 2018.

Within the U.S. thermal business, Peabody successfully concluded its negotiations with the Salt River Project that purchased coal from the Kayenta mine, resulting in a one-time $69 million settlement related to recovery of additional contract costs. In addition, the company reached a favorable $20 million settlement with a Powder River Basin (PRB) customer.

Fourth-quarter PRB shipments declined 8% from the prior year to 27.6 million tons, reflecting the challenging demand backdrop across the United States. The Midwestern segment cut costs per ton by 10% from the prior year to $31.61/ton even as volumes declined 20%, following reduced production from less uneconomic mines. Costs improvements reflect higher productivity across several mines as well as favorable mix from ongoing mines.

Looking toward 2020, Wambo JV production is targeted to begin late in 2020 and allow for optimized mine planning, improved strip ratios, enhanced quality and the potential to extend the life of the open-cut operations beyond 2040. The Wilpinjong Extension Project continues to progress.

Peabody said it expects 2020 seaborne metallurgical sales to be approximately 8.3 million tons, saying production would be weighted toward the back half of the year as Shoal Creek is expected to return to normal production levels, following a several-week outage in the first half of the year to finalize an upgrade of the main line conveyor system.

Following a significant reduction in holding costs, Peabody is “commencing a commercial process” for the North Goonyella mine in parallel with the existing and ongoing mine development plan. The company said it’s considering options such as a strategic financial partner, joint venture structure or a complete sale of North Goonyella. Peabody is currently in discussions with the Queensland Mines Inspectorate regarding ventilation and re-entry of Zone B.

Peabody expects a decision from the U.S. Federal Trade Commission regarding its proposed PRB/Colorado JV in the first quarter. In addition, Peabody and Arch are engaged in permitted integration planning for the proposed JV.

For 2020, Peabody has a strong U.S. contracted position with 96 million tons in the PRB and 20 million tons in other U.S. thermal mines, and has the flexibility to increase volumes should demand warrant. Production from its three PRB mines (Caballo, North Antelope Rochelle and Rawhide) totaled 108 million tons in 2019, according to data from the U.S. Mine Safety and Health Administration.