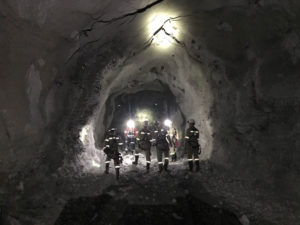 Underground production at Nevada Copper’s Pumpkin Hollow mine continues to ramp up with hoisting rates of a combination of stope ore and development material expected to increase from approximately 3,000 tons per day (t/d) in the second quarter to 4,000 to 4,500 t/d during the third quarter.

Also, the paste plant for the underground mine paste plant began wet commissioning and filling of the first stope with paste backfill in April. Commissioning activities are ongoing with initial throughput capacity expected to be realized by the end of June. The company expects the implementation of paste backfilling will result in quicker stope turnover leading to improvements in hoisting and production rates going forward.

The dry commissioning of the surface ventilation fans was completed in early April. Initial excavation of the third ore pass is complete with construction activities scheduled for completion in the third quarter.

The 2022-2023 drill program for the open commenced with one drill arriving on site in late April and a second drill planned to arrive during the second quarter. The prefeasibility study (PFS) for the open-pit project is expected to be completed in the third quarter, as planned. The results of the drill program currently under way will not be included in the PFS, however, they are expected to be included in an open-pit feasibility study planned for the second half of 2023.

The open-pit project has all the material permits required at this time for mine construction and operations and proven and probable mineral reserves, as estimated in the 2019 Technical Report, were 3.59 billion lb of copper (385.7 million tons grading 0.47% copper).

“We have completed a number of key projects at site that are aimed at improving productivity, stope availability and equipment reliability for the underground mine,” Nevada Copper President and CEO Randy Buffington said. “The prefeasibility study update for the fully-permitted, open-pit project is well under way and will include important sustainable initiatives such as the solar project.”

The exploration program is an important step toward the company’s longer-term growth strategy, Buffington added. “We are laying the groundwork necessary to demonstrate the potential for this significant copper operation and assembling the right team to execute on these plans.”

During the first quarter, Pumpkin Hollow hoisted 97,518 tons of material, a 66% improvement over the fourth quarter of 2021. Included in the material hoisted was approximately 32,025 tons at an average grade of 1.3% copper mined from three stopes including ore mined from stopes in the Sugar Cube zone. Lateral development rates improved 31% quarter-to-quarter with 3,126 ft developed. Two additional loaders were lowered underground in April further increasing mucking capacity and an additional haul truck is scheduled to be hoisted in May.

As previously disclosed, the underground mine continues to advance across a water-bearing dike structure with the first crossing being completed and grouting activities under way on the second crossing to be followed by advancing development under steel sets through the dike.

While there have been some challenges due to highly variable ground and water conditions, the company is advancing development from Ramp 1 on the other side of the dike to maintain the production schedule. The company expects to complete the second crossing in the second quarter.